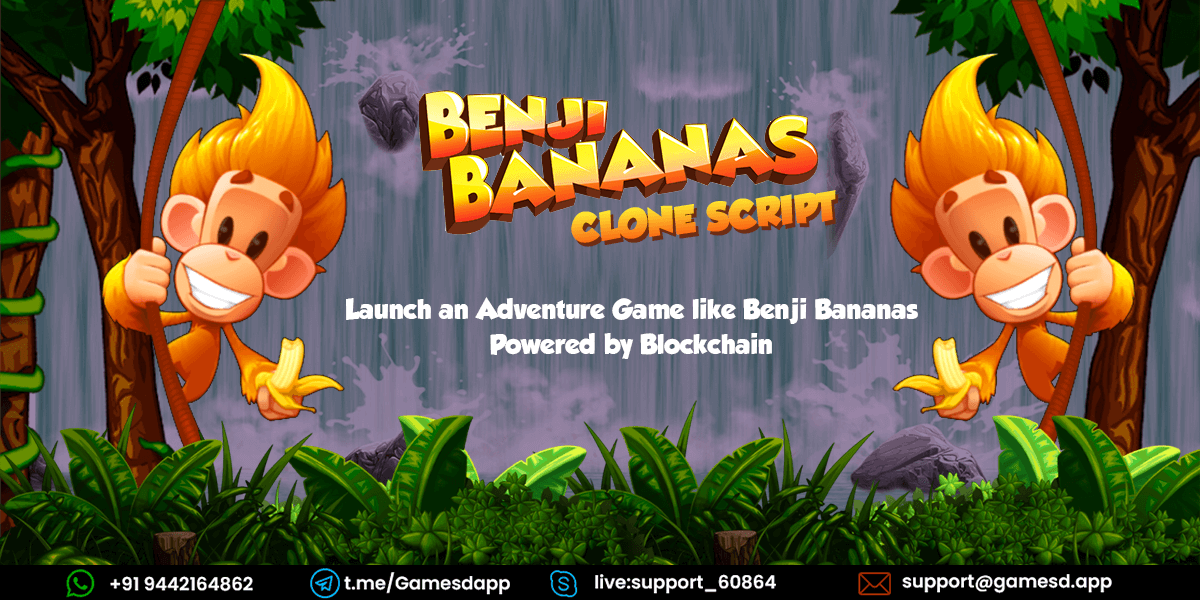 Benji Bananas clone script is a ready-made adventure idle game script, 100% error-free and tested where anyone can launch their gaming platform like Benji Bananas on the ethereum blockchain.GamesdApp provides Benji Bananas clone that grips high-security standards and benefits with an ERC-20 token, named PRIMATE token which is used during trading (swapping) with other fungible tokens. you can even customize our Benji Bananas clone as per your business needs.

Benji Bananas is a blockchain-based game that has a Polygon layer 2 side chain and the ethereum network. It offers an NFT membership pass, and the coins it is linked to are identified as "PRIMATE" and "APE".

Players in this adventure game take control of a monkey who swings from vine to vine across the jungle in the physics-based action runner/platformer where he/she collects fruits and other objects to obtain improvements. A jetpack, speed boost, eagle ride, and other skills and power-ups are examples of playable upgrades. Cosmetic stuff like new skins is another type of upgrade.

Users can still have fun with the game without participating in the play-to-earn aspect at all, and it is still free to download and play. However, by including a special NFT, Animoca companies have made it easy for gamers who want to play for bitcoin to do so. The PRIMATE token is the cryptocurrency they can acquire.

The ethereum blockchain served as the foundation for the Benji Bananas play-to-earn system, and the PRIMATE token was launched in April 2022. It is an Animoca brands ecosystem fungible ERC20 token that can be traded for other fungible tokens.

An ERC-1155 token created on Ethereum is known as the Benji Pass or Benji Bananas Membership Pass. This indicates that the token is an NFT, not a Non-fungible token. Users can only access the play-to-earn features of Benji Bananas if they have a Benji pass.

This takes a lot of effort to succeed in the blockchain gaming ecosystem's top ranks. The main perks that are contributed to the Benji Bananas clone script are listed below

Unlike many other games with a similar subject, this blockchain game with a jungle theme is surprisingly fun. Despite having straightforward game principles, this game is entertaining to play and highly addictive.

This game was initially created as a normal mobile game without considering the play-to-earn approach.

Additionally, this serves as the game's key advantage over rivals, It not only had a pre-existing player base when it entered the blockchain industry. But it is also a well-rounded mobile game that can draw in new players.

Its success in the environment of play to earn was greatly influenced by all of that.

Most play-to-earn games have low user Preservation rates which render them long-term unsustainable. It also boils down to placing an excessive amount of emphasis on income.

The screenplay for the Benji Bananas clone calls itself a play-and-earn game, but not play to earn the game. Even though the two are comparable, the difference is significant.

While Play and earn games prioritize having fun and gameplay more than earning tokens, play-to-earn games are only focused on gaining tokens with little to no concern for gameplay.

To put it another way, the emphasis is on engaging gameplay and earning simply a fun perk of playing. The Benji Bananas clone script realizes that this is the secret to having strong preservation.

Gaming on blockchains is still relatively young. There is not a tried-and-true recipe that ensures success.

As a result, developers that want to be successful in the play-to-earn ecosystem must be willing to adapt as they go. It was done using a Benji Bananas clone script.

Most importantly, the team behind this game values player input, which helps to shape how it develops over time.

As an illustration, the pass-above multiplier system and reward factors were implemented in season two in response to suggestions and requests from the community.

You can only imagine how ecstatic the neighborhood was that their innovative suggestions were put into action.

How do play to earn involved in the Benji Bananas clone software?

Initially, you must go through a KYC procedure that involves connecting to the network with your web3 wallet to earn tokens that may be converted into money. This is something you may accomplish from the website's home page.

You will need to confirm your membership pass after connecting your wallet. This is the Benji pass NFT which lets you accumulate PRIMATE tokens by playing the game.

The next step is to connect your web3 wallet to your Apple ID or google play account.
You must then finish the block pass KYC verification process. When everything is finished, you will be prepared to play the Benji Bananas clone script for money.

How does the Benji Bananas clone work?

Although this is simple, the gameplay is engaging. The focus is on gathering bananas to east more points. Although it is a running game, players can go as far as they can because the stages don't terminate after a particular amount of movement. The rate of gaining bananas at these levels varies, but the level advancement is linear and the graphics change when players walk a given distance.

The players are handed automated assignments such as "jump a certain number of trees, pick a certain amount of bananas, and swing for a certain distance. players receive more bananas after completing the missions. In general, the gameplay principles are straightforward but addictive which is appropriate for a light smartphone game.

As a top blockchain game development company, Gamesdapp provides you with the tools to create a specialized, high-end gaming platform. Players can browse every item offered in the game on our decentralized marketplace, which is similar to Benji Bananas. We have skilled blockchain game developers who research deep beyond their knowledge and satisfy your project needs. We offer a multi-tested ready-made clone script and also white-label solutions. We have 200+ developers to full fill your requirements and doubts. We assist you all the time and deliver your project on time.

If you are planning to develop a monkey-based P2E game like Benji bananas then this is the right place.

Consult with our experts to know more!!