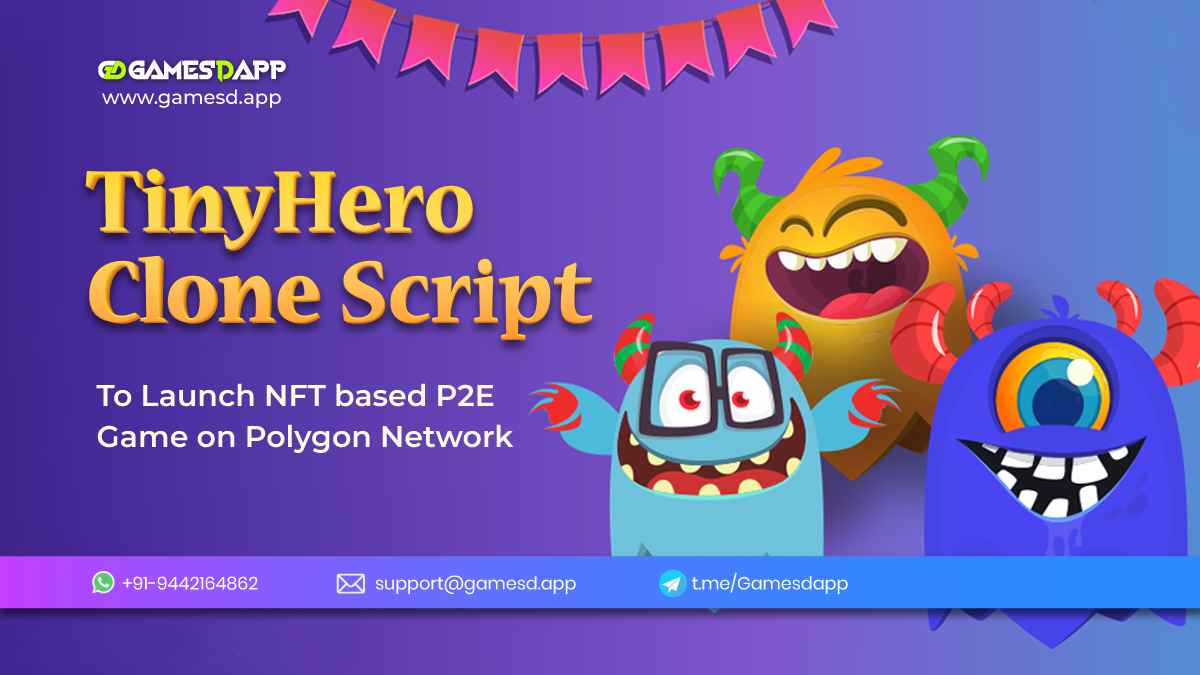 TinyHero clone script is an operational replica exhibiting the core functionalities of the P2E NFT Game - Tiny Hero that can be claimed to earn MATIC from the ecosystem as well as utilized to play in-game. GamesDapp is proud to announce the debut of our Tinyhero NFT Clone Script, through which anyone can able to launch their own Blockchain-based NFT Game Platform. TinyHero clone script enables a tower defense Gameplay in which you guard your treasure against the heroes.

During a match, each player will form a team of three characters from the heroes they own, and the match will earn them experience (XP) and TINY. Players will be able to upgrade their characters to higher levels once they have accumulated enough XP.

Get a Free Live Demo of >> TinyHero Clone Script

Tiny Hero is the first-ever player vs environment and player-to-player NFT game on Polygon, with auto reflection and auto claim protocol. TinyHero also allows for real-time player versus player games on the blockchain. The game Tiny Hero is Influenced by Tikitoken and Safemoon, which raises awareness about the benefits of rewards.

The features of the TinyHero clone script are as follows,

Heroes with agility have been fine-tuned, making them masters of weaponry and combat skills. These heroes have great attack speed and armour, and they prefer to use their regular attacks in conjunction with the items they have equipped, however, they can use their abilities if necessary. Because of how they scale, agility heroes are frequently used in carrying and gender roles.

2% from Sell tx will be burned forever.

4% of every transaction is transformed into a liquidity for Polydex. It is automatic and helps create a price floor (stability).

Strength heroes are tough fighters who can take more punishment than other heroes. These heroes have the most natural health and the ability to replenish quickly, allowing them to stay in the fight and deliver damage. Many strength heroes are initiators or heavy disablers, and they can play a number of roles.

No need to claim your earned MATIC. I t can be automatically sent to your wallet for every 60 minutes.

4% of each and every buy/sell  will be taken and redistributed to all TINY holders. You can earn MATIC for holding TINY tokens.

2% of every buy and sell transaction is allocated to TinyHero in MATIC. Those funds will be distributed to game players.

Intelligence heroes are spell and ability masters. They have significantly bigger mana pools and mana regeneration than other heroes. As a result, they frequently employ their abilities to aid comrades and harm opponents rather than using physical assaults, however, some of them do use their magical abilities to greatly boost their attack capabilities. The majority of clever heroes are vulnerable ranged heroes, however, it does not mean they are easy to kill. As a result, they're frequently used as a support, ganker, or pusher, with others being used as drives.

The gaming industry's business models will be disrupted by play-to-earn and other new models that are coming in. Many people believe that NFT is the key to bringing blockchain to the public. Polygon has also established a $100 million gaming fund to help creators integrate Web 2.0 games with Web 3.0 decentralized technology. We certainly want to be a part of its development.

The way the system works for holders is that if you buy TINY tokens and keep them, you'll get $MATIC in your wallet every 60 minutes. The number of TINY tokens you have will not change.

The contract takes account of all token holders in an array.

For processing, the contract maintains an index into the array.

The token adheres to the Dividend-Paying Token Standard, which ensures that all MATIC contract gains are dispersed equally between token holders.

When a user is assessed, the contract examines how many withdrawable dividends they possess, and if that number is greater than the minimum threshold for auto-claims, the contract will either collect those dividends for MATIC or buy back tokens for them.

This system is completely automated, and there is no little gas price based on the quantity sent. The number of holds processed for each transaction varies according to the transaction size. Dividends will be distributed to holders in order of their queue position. It's a perfectly automated and equitable system.

Why to start your own NFT Gaming Platform like Tiny Hero?

Tiny is the highest-rated NFT Game on the market right now. By allowing players to customize their environment, the TinyHero clone script delivers a seamless and hassle-free gameplay experience. A Blockchain-based Player versus Environment (PvE) game will be released. Anyone with acquired NFT can begin fighting the game's seven monsters with an 80 percent success rate, collecting EXP and TINY for each round of combat. The fighting is done in real-time and on the blockchain to ensure that the prices are fair and consistent after each bout.

For random breeding of new NFTs, players can combine any of their NFTs. With luck, you'll be able to create a fresh new, pure, powerful, and valuable NFT. Players can improve their NFT at any time by fighting EXP and TINY to have a powerful NFT.

We,  GamesDApp a Leading NFT Game Development Company can help you create a high-end, robust NFT marketplace with tailored solutions. Our TinyHero Marketplace clone is a decentralized marketplace where players can improve their heroes to higher levels by accumulating enough XP.

For Technical Queries, Connect with our Experts!!