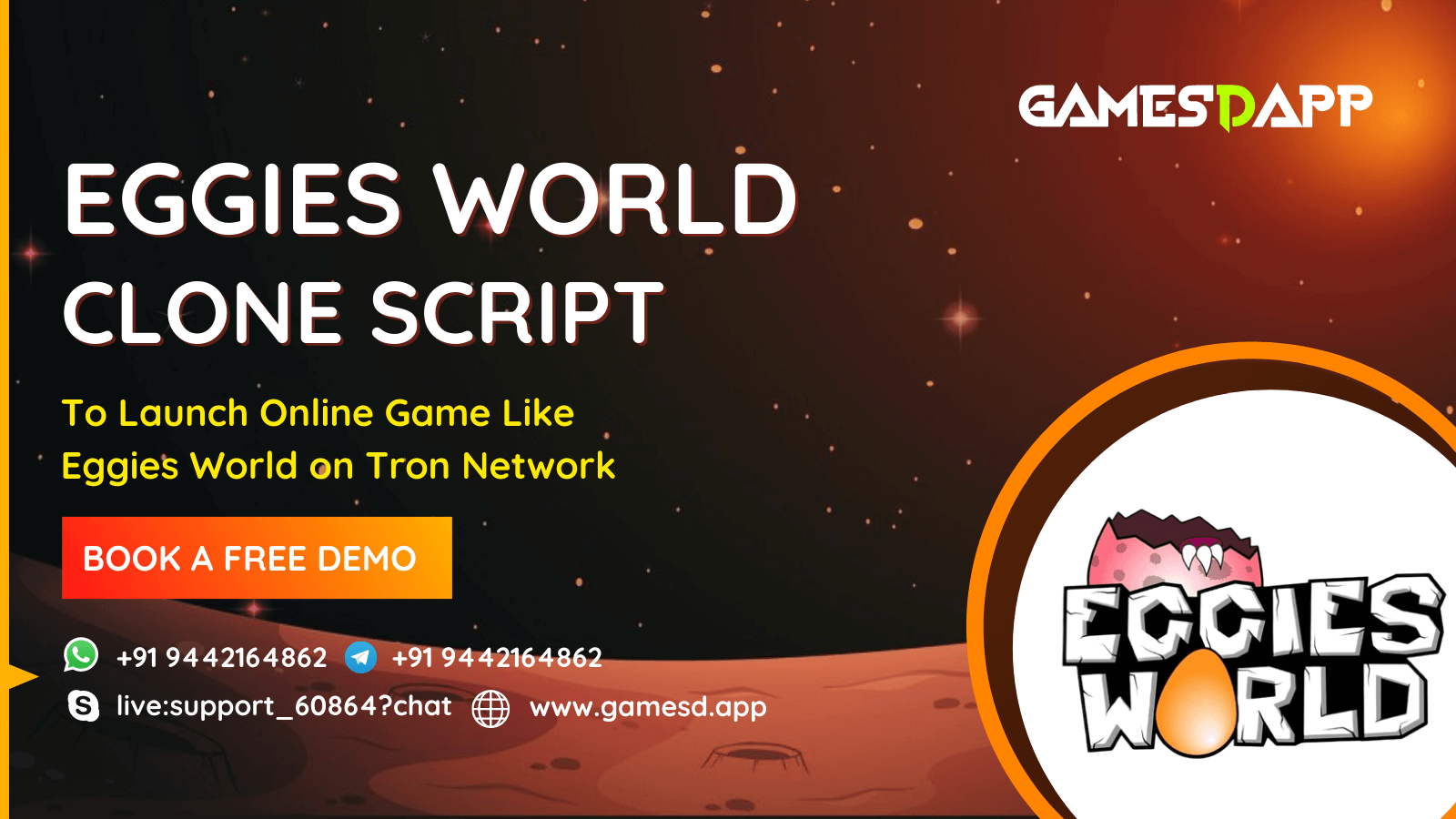 The features of Eggies world clone are as follows,

The pro-activity base ensures players stay alive in the game. Without consideration, it enables a monster to be alive for 7days.

Eggies world can be accessed through a variety of login options. Players can also use their wallets to log into the Eggies world.

Monster gets an EXP rank and it can be earned by feeding, fighting, then again eating, etc.

Visible eggs are earned after this game is played with one or more EGG tokens.EGG shows data like power, speed, loyalty, happiness, luck for displaying the power of the monster.

Once an EGG is incubated a monster appears by allowing functions such as feeding and playing.

A monster is attacked by a set of series attacks with the help of EGGPower a player can unlock a monster.

A gaming token that can be used for buying items from the shop in Eggies world.

It is a shop where players can purchase items like feed, protect, poison, and personalize a monster in the game.

Environments have particular impacts on the EGG/data, monsters, and a player has complete control over the environment allowing them to alter quickly.

A chat function that allows players to communicate with one another.

Another entertaining approach to earn TRX is to mine it while playing games and then stake it for payouts. The greater the game's difficulty level, the more you earn.

Here are the listed games that reward you in TRX:

What is Eggies World?

Eggies world is a well-known online game built on the TRON blockchain. Every participant in Eggies world has a large chance to collect TRX tokens as a prize for possessing a unique monster. To become a living monster, an egg must be hatched.

Let us take a closer look at the world of eggies!

The Eggies world gaming concept is a fascinating subject to investigate. In Eggies world, a game platform, players must devote a great deal of time and effort to transform an ECG into a monster. An EGG might take anywhere from one to two weeks to hatch. To keep an EGG alive once it has hatched into a monster, the player must feed it.

Monsters in the Eggies world are fed TRX tokens which have a varied influence on your monster according to whatever token you fed. Other players can easily harm your monster, yet it never dies as a result of their actions. The only way to put an end to your monster’s life is to cease feeding it. The DNA properties can be restored when it dies for a charge of around 100 TRX.

Gamesdapp is a well-known blockchain game development company that provides elegant online game development solutions for launching an Eggies World-like online gaming platform quickly. Our team places a high priority on meeting customer needs and expectations. We have a team of professional developers with extensive experience in creating attractive blockchain games. Our team is always here for the quality on-time delivery of the project and 24 hours customer support.

Connect with our team to know more!

Disclaimer: Gamesdapp doesn't have any control over the trademark of "Eggies World" and We are not doing any promotions for them. We are just using the term "Eggies World" for quick understanding purposes only. Our services are not meant to influence any organization or individual.