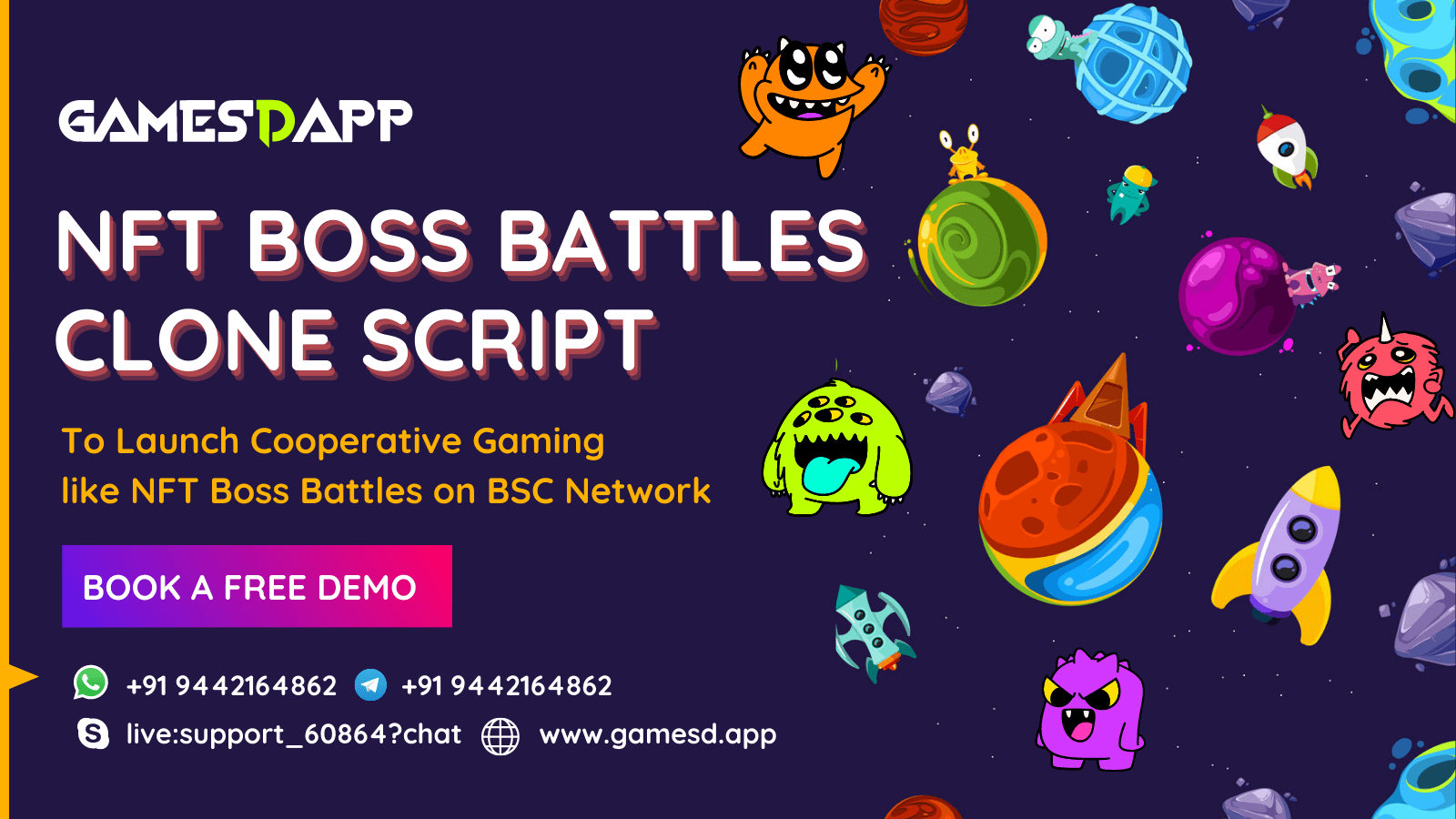 NFT Boss Battles Clone Script is a BSC-based game that supports you launch your NFT gaming platform like NFT Boss Battle is a digital monster game platform built on the Ethereum blockchain where players can create heroes and make battles against the  monsters.

Gamesdapp offers NFT Boss Battles clone script that holds high-end features and functionalities with ERC721 standard which can be used inside the platform to provide opportunities for the players. You can customize the NFT boss battles clone as per your wish.

Profit from unique and low costs

Every hero in NFT boss battles is special and each is represented by an ERC-721 based on the Ethereum network. The game is a decentralized application that runs on the BSC allowing for quick and inexpensive transactions.

Create your hero and send him or her into battle against formidable monster bosses. To construct an invincible force, level up and gain more characters with varied abilities. Join forces with other players to take on a more powerful opponent.

Ready to play is as easy as visiting a website

On NFT Boss Battles, you can play the game right in your browser. You only need the metamask extension for Mozilla Firefox or Google Chrome to enter the battles and earn NFTs.

Advantages gathered from decades of experience

NFT boss battles are a new prototype developed by cipsoft, a german developer with over 20 years of experience in online gaming. LteBringer is the first pure Litcoin game that has already been created by the creators of the breakthrough MMORPG tibia.

Blockchain has progressed from a technology that powers cryptocurrencies to a solution for a wide range of businesses with online gaming at the top of the list. Blockchain gaming enables in-game payments to be made quickly and securely as well as providing immutable proof of ownership of game assets via NFTs.

The use of NFT in blockchain gaming adds a social and competitive element to the acquisition, accumulation, and trade of NFTs making this new technology more accessible and entertaining for a wider audience.

CipSoft GmbH is an independent online game developer and operator for a variety of platforms. Aside from the MMORPG tibia which is one of Europe’s most popular online games, the game developer’s portfolio includes TibiaME, the first online role-playing game for mobile phones. Cipsoft is set to release a third product, Fiction fighters, an interactive webcomic shortly.

What is NFT Boss Battle?

NFT boss battles is a BSC-based game and it is rather a self-explanatory dApp. It enables you to create heroes and battle boss monsters. You could win certain rare heroes concerning NFTs.

Gamesdapp is an NFT Game Development Company that offers the NFT Boss Battles Clone to launch online games like NFT Boss Battle. We can support you in developing your own highly secure NFT gaming platform, complete with cutting-edge features and security measures suited to your needs and requirements. We have a talented and experienced team of technical experts who are eager to assist your organization in developing a high-performance gaming platform. Our clone script is highly versatile, enabling you to configure and control it exactly how you want.

Talk to our experts and get a free quote now!!

Disclaimer: Gamesdapp doesn't have any control over the trademark of "NFT Boss Battles" and We are not doing any promotions for them. We are just using the term "NFT Boss Battles" for quick understanding purposes only. Our services are not meant to influence any organization or individual.