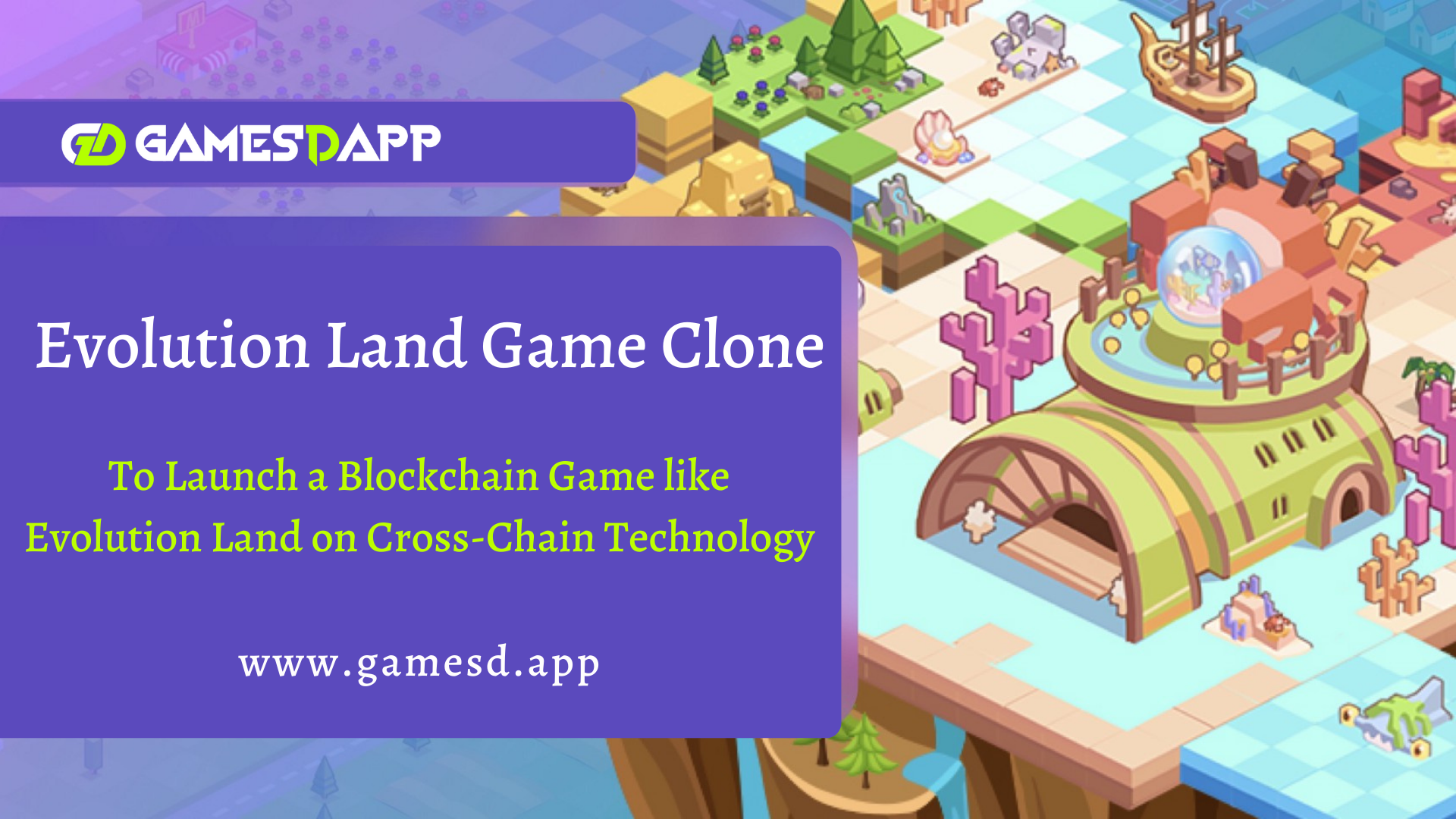 We Gamesdapp, as expertize in Blockchain Game Development offers clone game of popular blockchain games in the market. We provide Evolution Game Clone that helps you to launch your own gaming platform with various gameplays, including management, collection, education, gene, battle, auction, and game etc. So it is easy to launch your own gaming platform exactly like Evolution Land. Our Evolution Game Clone is completely different from traditional games, and its game logic are written in smart contracts and deployed on various blockchain networks.

Evolution Land is blockchain game through the cross-chain technology powered by Darwinia Network that has two continents deployed on Ethereum and Tron where you can buy and sell land, govern your space, cultivate crops, and develop buildings. There are a totally 26 continents, each on different blockchains. Users get to acquire land plots in these continents, farm, work on different constructions or hire other users to mine components in their land. Players can also buy or sell lands on the continents, mine resources, and construct buildings, PvP, scientific research etc.

Evolution land gameplay extensively uses both Fungible tokens and non-fungible tokens that are truly owned by players and secured by underlying blockchain technology.

How to play Evolution Land？

Users can purchase the land in Evolution Land by auction, at the same time user can select different activities to participate in the game. For example, the miner can collect the gold, wood, water, fire and silicon materials produced on the land, and the smelter can make the elements into props, etc. Evolution Land also provides casinos, arenas where the players can play a variety of entertainment activities.

In short, the Evolution Land has the following 4 characteristics.

1. Combine blockchain games with social interactions and explore the value of social elements

2. Promote and realize the decentralized self-government and build a common ecological environment.

3. Seamless integration with other blockchain games to achieve cross-game flow of game assets

Evolution Land players connects using avatars called Apostles. Each apostle contains unique genes and talents with multiple attributes  that determine its abilities, such as mining, healing, researching, and fighting. You can rent or sell those apostles to other users or setup your apostles for tasks based on their abilities.

Apostles can be purchased through auctions in the game using RING — the native utility token implemented as ERC20 smart contract and bred to find rarer ones. Gamers use RING token as currency and KTON to vote for governance parameters such as tax rate and in turn will receive in-game revenue dividends.

NFT Collectibles: There are exclusive characteristics and as many as ten talents determined by genes for the limited original apostles and their offsprings. Users may have the apostles breeding for unique apostles with advanced genetic variation.

Education: The apostle's proficient ability allows each of them to have their right to work or fight and make him or her excellent through education.

Free Market: Almost everything in the Evolution Land can be traded in the in-game marketplace or at external market. The In-game marketplace allows users to trade land/apostle/resources, hire workers, or even find your apostle's soulmate and the prices are determined by players directed by demand and supply. You can also transfer your assets and carryout trade on any third-party marketplaces. These markets can be categorized into NFT (non-fungible token) markets as well as FT (fungible token) exchanges according to what you want to trade.

Career: In addition to the job role of miners, Evolution Land also offers more career choices as well as corresponding social roles such as warrior, doctor, musician, etc. Each apostle can find their right place.

Play to Earn: 70% of revenue of the game will be shared within the players; you can share it whether you are a KTON holder or active in construction.

The revenue usually comes through these channels,

New Apostle sales - Limited first-generation Apostle were sold at a fixed price wbich will be contribute to the revenue pool.

Second Market Trade Tax - A Small fee is charged when a user lists their property Land, Apostle, or other props on the in-game marketplace

Inter-continent Import Tax - This tax will be chanrged when some goods, resources, or Apostles are transferred from other continents.

Business Tax - Small amount of  tax will be charge for any other commercial business activities.

DeFi: Decentralized Finance is entrenched everywhere in the gameplay. Your capital or effort invested in the game will surely help to earn you a reward.

Owned by Player: The Players truly own the game. Evolution Land is designed and developed to be a Decentralized Autonomous Organization known as DAO

Decentralization is achieved through these means:

On-chain Game and Contract Operation: Ownership of the game assets is approved by public blockchain technology. The players themselves own their identity accounts and game assets such as tokens or  props.

Cross-Chain Token Economy: The world's first cross-chain token economy system deployed on a different public chain, token, and assets can be exchanged in other continents through the Darwinia Network, constituting a purely digital world.

Decentralized Autonomy: Designed to be a self-evolving, scalable, and open system.

Open and Borderless: With the open interfaces, SDK, and on-chain

How to Launch Virtual Simulation Blockchain Game Like Evolution Land?

To develop and launch your own Blockchain Game Like Evolution Land, You have to hire the best blockchain game developers.

Enhance your gaming experience in the evolution of blockchain game development with our game developers!!!

We offer Blockchain Game Development Services to build your Gaming Platform Like Evolution Land, built on Cross chain technology with a better performance and advanced security. Our blockchain experts will design an engaging gameplay, creates real time gaming experience with innovation as well as keep your gamers and your revenue system busy.

Talk to our experts and get a free quote now!!

Disclaimer: Gamesdapp doesn't have any control over the trademark of "Evolution Land" and we are not doing any promotions for them. We are just using the term for quick understanding purposes only. Our services are not meant to influence any organization or individual.