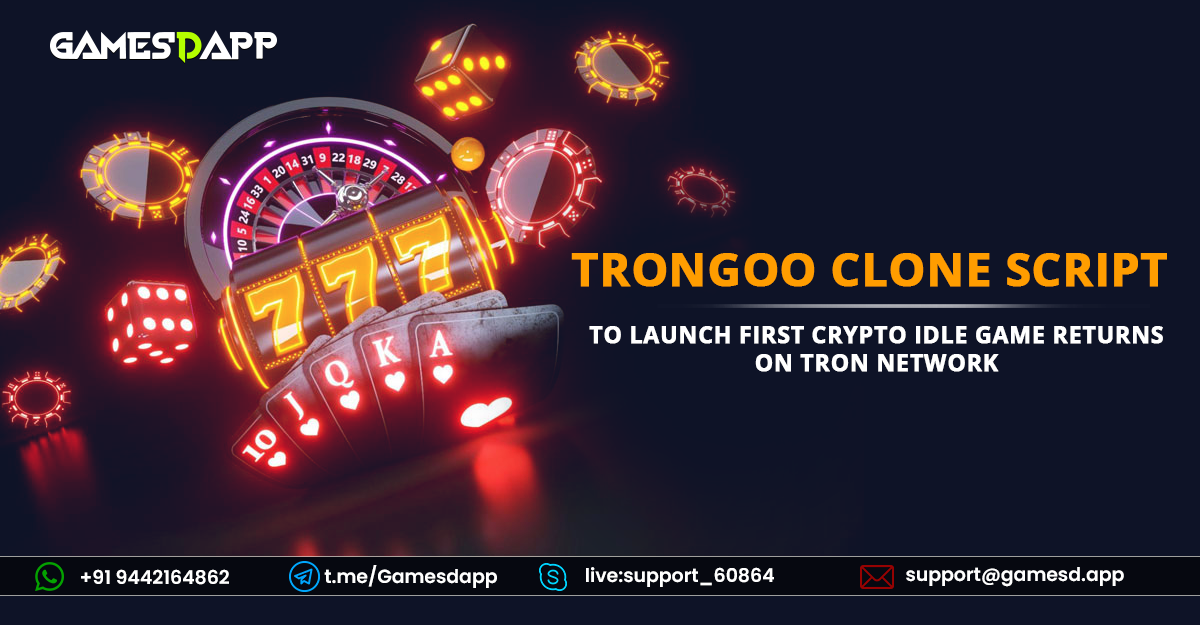 TronGoo clone script is a high secured NFT game Marketplace script that operates similar to the TronGoo gaming platform. The TronGoo clone is a passive game. It allows you to play and earn tokens at the same time. The TRON blockchain is used in the game. As a result, it is decentralized and untrustworthy. By definition, a TronGoo clone is competitive.

GamesDapp is the leading blockchain game development company that develops similar gaming platforms like TronGoo  on the Tron network. TRON Goo clone is a new browser game in which you must assemble an army of pets in order to create a strange goo in a hidden lab. Furthermore, you can engage in combat with other players in order to steal their unguarded created goo.

How does it work?

Production units and barracks units are the two types of units. The majority of units can be purchased using created goo, while only a few can be purchased with TRX currency (and they are more powerful too). Production units will produce a certain amount of goo per second, whereas barracks units vary in a variety of shapes and have three basic stats: assault, defense, and stealth capacity.

Some barracks troops will prioritize defense over the attack, while others, such as the Baggage Kitty, will focus solely on a particular stat, such as theft. Production and barracks units can be upgraded with goo or TRX to increase their stat value by a fixed number or percentage.

The created goo is just unsecured, allowing other players to steal it. To benefit from produced goo, you need to invest in the deposit pot: this pot will collect goo produced from all players and it will split daily among them a share of TRX used in the game.

You gain more TRX at the end of the share distribution cycle if you put more goo in the pot. But there's another way to gain TRX coins that involves the research pot: every day, you'll get a percentage of TRX based on your Goo per second production compared to the other players!

The most enjoyable and tactical aspect of this game is battling against other people. You can assault a player once every 30 minutes, but your defence stat will be reduced while the cooldown is in effect. You won't be able to steal more goo than your current stealing capacity, which can be expanded by hiring more units or improving them, as previously stated.

TronGoo dApp clone is a Tron protocol-based crypto asset in the Games sector. TronGoo dApp is now ranked #1226 in overall dApp rankings by user count, and #122 in the Games category, giving you a decent sense of how it compares to its competition.

The dApp's Balance is $9.6K, and the Volume is constant at $0.00, according to TronGoo dApp data from the last 30-day window. In the last 30 days, TronGoo has generated 0 Transactions with a 0% change. Clearly, the Volume has remained unchanged from the preceding 7-day period by 0%. As per the data gathered, The TronGoo user base is 0 and has remained stable by 0% during the last 7 days,

We also recommend looking at the TronGoo Activity Overview and Balance of Smart Contracts graphs to understand how these key data vary and fluctuate over time.

After you've claimed your free unit, your factory will gradually begin generating Goo, allowing you to buy more basic units with Goo! To hasten your advancement, you can purchase premium units with Tron.

Similar to Tron,Tron clone spent in the game (via upgrades & premium units) goes to the game’s pot, and each day

The remaining 5% of the money is allocated to all players:

Players who deposit their Goo into the daily deposit box will receive 1%. (they burn their Goo in order to sell it for trx)

And that pretty much sums up the Goo production side of things; you constantly recruit units to help you make more trx by increasing your Goo output!

Since its demand is skyrocketing gradually its hype is spread over the crypto industry the major fact TronGoo clone script is trending now.

Aside from the standard manufacturing gameplay, Goo also has competitive PvP, where you can recruit army units and use them to assault other armies in order to grab their Goo!

Defense —When other players attack you, the higher your defense, the better your chances of defending successfully. Also, each defense you have prevents your last 1K of Goo from being stolen, so if you want to wake up with a lot of Goo, build some defense before you go to sleep!

Looting — During an attack, how much Goo a unit can steal. (If the target has enough money to take, thus pick your targets carefully!)

TronGoo clone is an open-source NFT marketplace created on the TRON blockchain. The NFT marketplace is a fast-increasing platform in the crypto industry, because of the increased interest in NFTs among young people. GamesDapp, a subsidiary of GamesDapp, can help you realize your NFT platform concept.

TronGoo clone is a pretty simple game to understand: you run a Goo factory and your aim is to produce the most Goo possible. Tron Goo is valuable since it allows you to buy more units and upgrades while also earning you trx. Army troops allow you to steal goo from other players, while production units make goo for you every second.

Gamesdapp is the leading game development company that provides the best gaming solution with the best add-on features. GamesDapp provides an exclusive game platform with all of its customized services if needed to make the platform appear and function flawlessly. With our experts’ help, you can start your own NFT marketplace similar to TronGoo.

Disclaimer: Gamesdapp doesn't have any control over the trademark of "TronGoo" and We are not doing any promotions for them. We are just using the term "TronGoo" for quick understanding purposes only. Our services are not meant to influence any organization or individual.