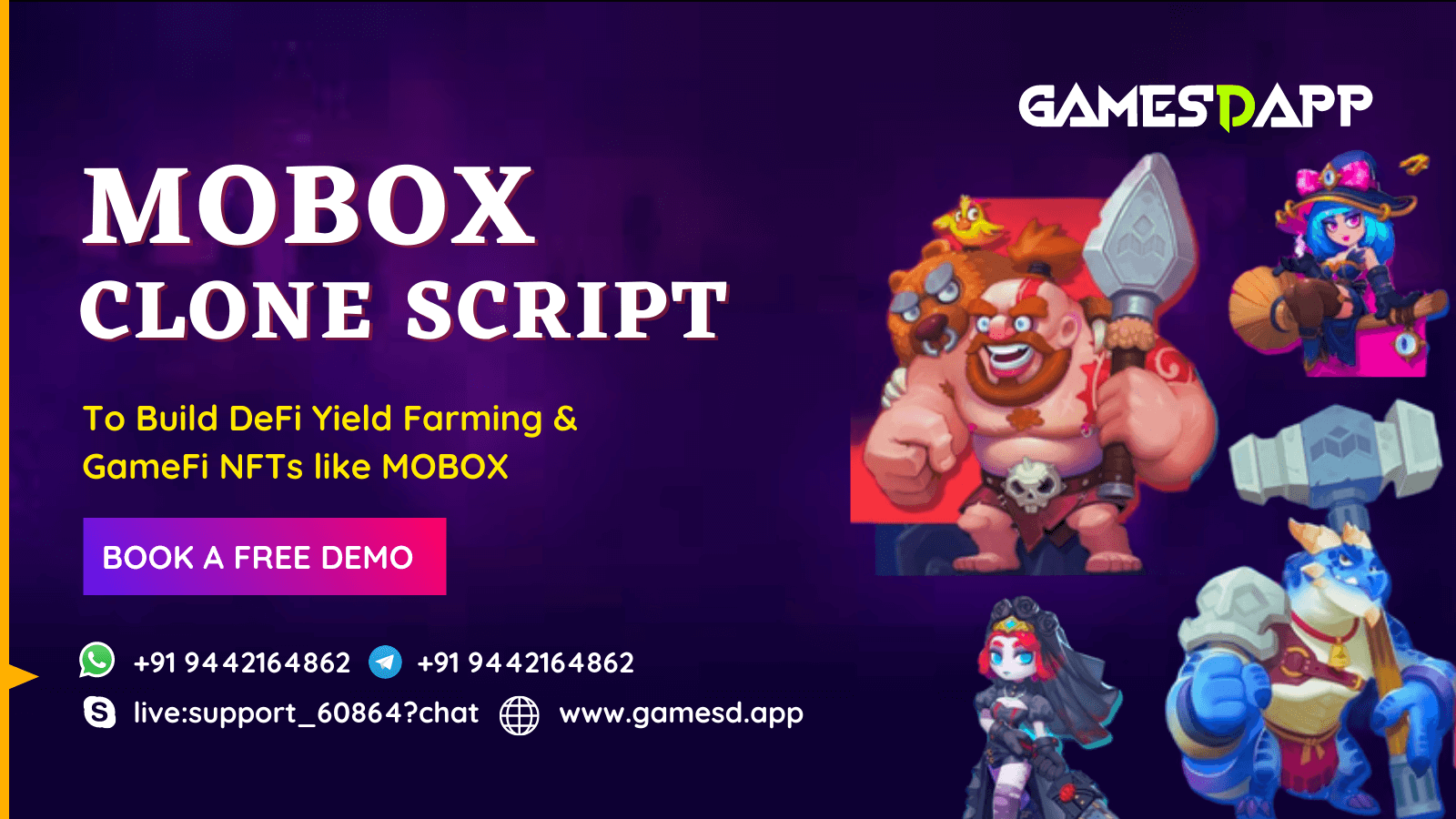 The gaming industry has always been especially innovative with the Binance Smart Chain blockchain. It has given us amazing graphics cards games, virtual reality games, and RPG games much-needed entertainment. With loads of blockchain-based games, the MOBOX has attracted the attention of many new-age gamers.

Now, this blog going to explain how to set up a new DeFi yield farming gaming like MOBOX? Let's have a look at the article,

MOBOX is a community-centric platform that empowers users by rewarding them for their participation and enjoyment. The MOBOX protocol creates GameFi by combining the advantages of field farming DeFi with gaming NFTs. The new free-to-play and play-to-earn gaming revolution. MOBOX is decentralized and has three distinct types with NFTs and DeFi capabilities are available on the MOBOX crypto gaming platform.

The native MOBOX token is required for buying, selling, and trading the “MOMO”. MOBOX NFT range as well as to participate in MOMO mining.  The MOBOX token also enables users to buy high-level equipment and in-game assets as well as unlock extra features.

The Mobox NFT marketplace is a decentralized exchange (DEX)  where NFT MOMO tokens can be bought and sold. Micropayments and a user interface(UI) distinguish the decentralized marketplace. It is also not necessary to unstake MOMO NFT to trade them.

Additionally, the bundle system allows players to sell numerous MOMO NFTs at once saving them money on gas. The Mobox buyback and burn pool receives 5% of each fee collected from the selling of NFTs. Players can rent out their MOMO NFT collection.

You can participate in mining after pledging MBOX-BNB LP. The average annualization is currently 200% and there are up to three times boost programs to choose from.

Participate in the game

The total hash power of your MOMOs determines your mining income. A fixed bonus hash of 300 will be added to owning a group of rare MOMO teams resulting in a total hast rate of at least 320. Not only can it be used for mining but it can also be used to make money in MOBOX games like “Block Brawl”.

You can engage in “mining +block brawl sweep+token adventure “ around the same time with three categories of rare MOMO and your income will be considerably boosted.

Players that are adept at games will have a variety of options for earning extra money including mining equipment in block brawls, trading equipment, and running awards among others. Renting MOMOs to play games is another way to make money, rare MOMOs only cost about 1 BUSD per day to rent.

The cost of raffle mystery boxes is ⅕ th of the average selling price from the previous week, so players might choose to sell them to make up the difference. It can be opened by players to acquire a random MOMO. It can be sold or utilized for mining.

Whereas many GameFi products struggle to maintain their audience, MOBOX has done well since its launch earlier this year. Because MOBOX’s audience has only grown over the year, we featured the BSC platform in the BGA blockchain game report 2021 as a roadmap for other GameFi products. It has risen to the sixth most popular dApp in the business.

MOBOX is a gaming dApp in which players stake liquidity provider (LP) tokens or stable coins in the exchange for KEYs which are yield farming tokens. In the MOBOX platform, KEYs can be used to unlock NFTs which can then be employed as playing characters or staking assets. The GameFi movement is best represented by MOBOX.

GamesdApp is the pioneer Crypto gaming company where we can perform play to earn crypto games on Binance smart chain (BSC). Mobox offers several ways of earning crypto rewards to play games. Our Gamesdapp will launch a MOBOX clone script like MOBOX. Our experts will satisfy your business needs. They will assist you throughout the project.

Disclaimer: Gamesdapp doesn't have any control over the trademark of "MOBOX" and We are not doing any promotions for them. We are just using the term "MOBOX" for quick understanding purposes only. Our services are not meant to influence any organization or individual.