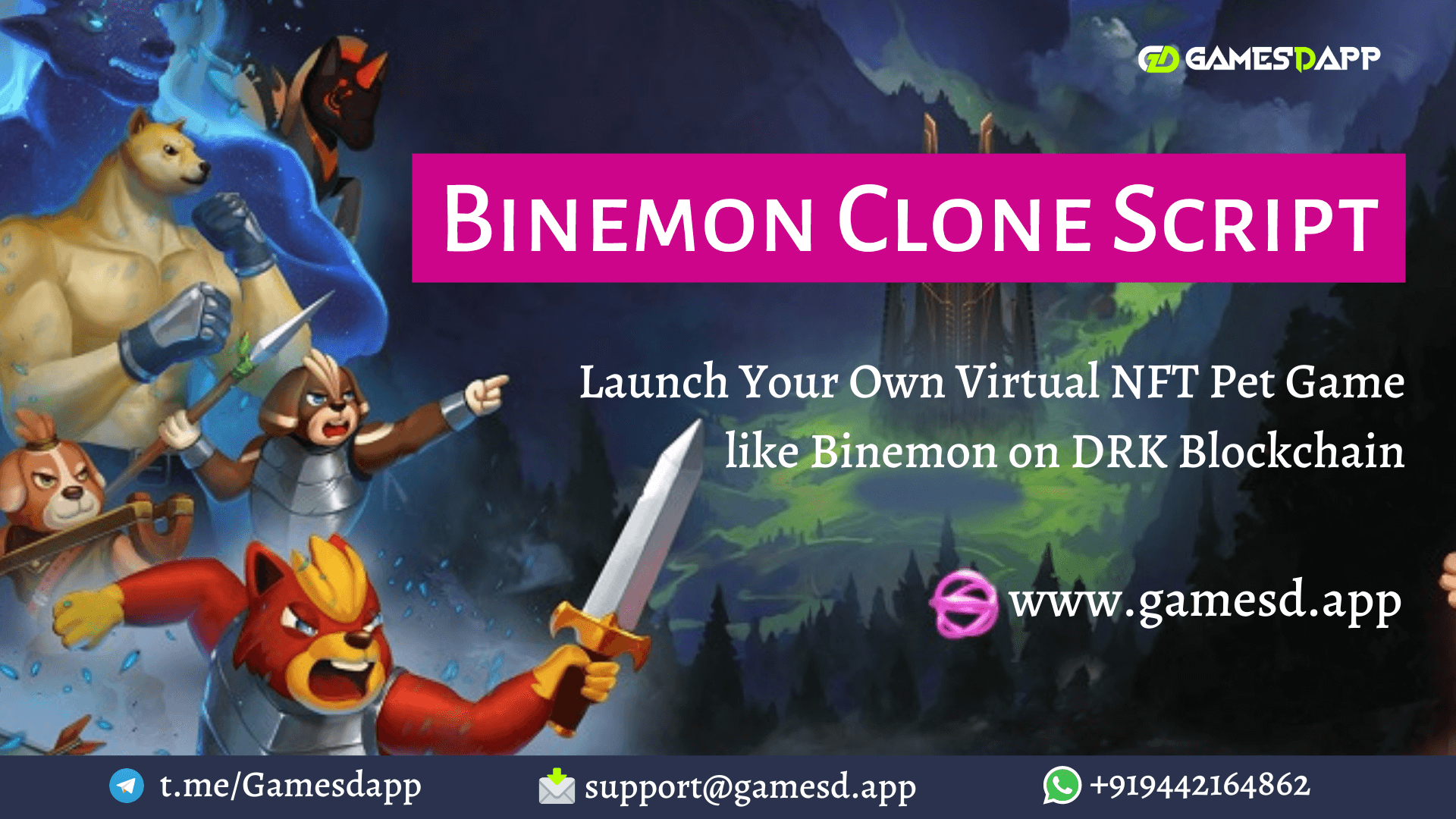 Binemon Clone Script is a pre-engineered script or a readymade solution of a virtual pet NFT game similar to Axie Infinity. The Binemon Clone Script enables you to launch your own idle RPG game that permits the users to collect and trade eggs and fuse them together to formulate rare "Mons".

<<Get a free live demo of Binemon Clone Script >>

Binemon is a digital pet game created on Draken Defi Blockchain, with NFT features combined with the elements of an RPG idle game that allows the players to trade and collect land, items, eggs, characters,  and more. In addition, the players/users can connect to fight PVP, PVE modes and can collect cryptocurrencies as rewards and prizes.

In short, Binemon permits to:

If you’re into the crypto industry and interested to start your own play-to-earn gaming platform then you should definitely add Binemon to your list!

Hence the comprehensive performance of NFTs and plenty of global audiences, people began looking for a similar platform like Binemon. Gamedapp offers Binemon Clone Script for those who want to launch their own NFT Gaming Platform with the exact functionalities of Binemon. The Idle RPG NFT game can be built in two modes, one from building the platform from scratch delivering end-to-end services of Binemon, and the other mode is by building the platform based on user's expectations and specifications.

Why kick-start your own NFT Gaming Platform like Binemon?

On the business aspect, Binemon achieved particular accomplishments to show its ability to compete with the traditional gaming platforms. The increase in global audiences is a clear sign that the players immerse themselves into the Binemon digital universe.

Some of the highlights of Binemon:

On the 1st day of operation, the website sold about 150,000 NFT in Binemon, allowing collectors to acquire characters like “Mons.”

Binemon presents the software on both prominent platforms, iOS, and Android, which no other NFT Games have ever done before.

Binemon has a 10-phase development strategy on its official website- Prometheus, Artemis, Athena, Babel, Ares, Hercules, Hades, Hephaestus, Hestia, and Hermes are the names of the gods.

Binemon has two amazing features PvP and PvE that allow users to battle other members for winning prizes or rewards.

The game has registered an average of 63,000 users for 10 days with more than 670,000 daily transactions on the DRK Chain. This means a considerable surge of communities around the world are aware of Binemon.

The functionalities of binemon are distinguished into two aspects: its blockchain and its token.

Binemon relied on Draken Chain to achieve an enjoyable gaming experience for its users.

DRK is a next-generation decentralized blockchain platform. The strong improvements from Proof-of-Stake create Proof-of-Honor, which uses HodgeRank to rank nodes based on the number of Stake and the number of Transactions, optimizes the performance of DRK chain while preserving high transparency and decentralization. Nonetheless, the integrated protocols help to optimize the ability to build Decentralized Applications such as Smart contracts, Gas stations, DaRK Privacy - Anonymity on demand.

DRK is the native token of the Draken blockchain, which you can earn by playing Binemon through breeding, selling pets, and winning battles. This DRK can be later exchanged for cryptocurrencies.

But that’s not all, since there is also an in-game unit called Ambrosia (AMB), which are like Pokémon Pokeball in the sense that they allow you to hatch Mon eggs but give you a bonus that makes them rare.

A cross-chain swap platform to trade seamlessly on any blockchain network such as TRON, Bitcoin, or Ethereum.

Draken Chain is striking for its high performance and scalability

With DRK Chain, Binemon Clone Script can be built with high efficiency and at a low cost.

Gamesdapp - As an Extrusive NFT Game Development Company, helps you to build a personalized Binemon Clone Script in-built with all the features of the primal app. Our Binemon Clone Development solution offers a highly scalable and optimized business solution that suits you the most. So far we have delivered different NFT Gaming projects globally.

Avail the best Binemon Clone Script from us that is readily available for instant launch!

Disclaimer: Gamesdapp doesn't have any control over the trademark of "Binemon" and we are not doing any promotions for them. We are just using the term "Binemon" for quick understanding purposes only. Our services are not meant to influence any organization or individual.