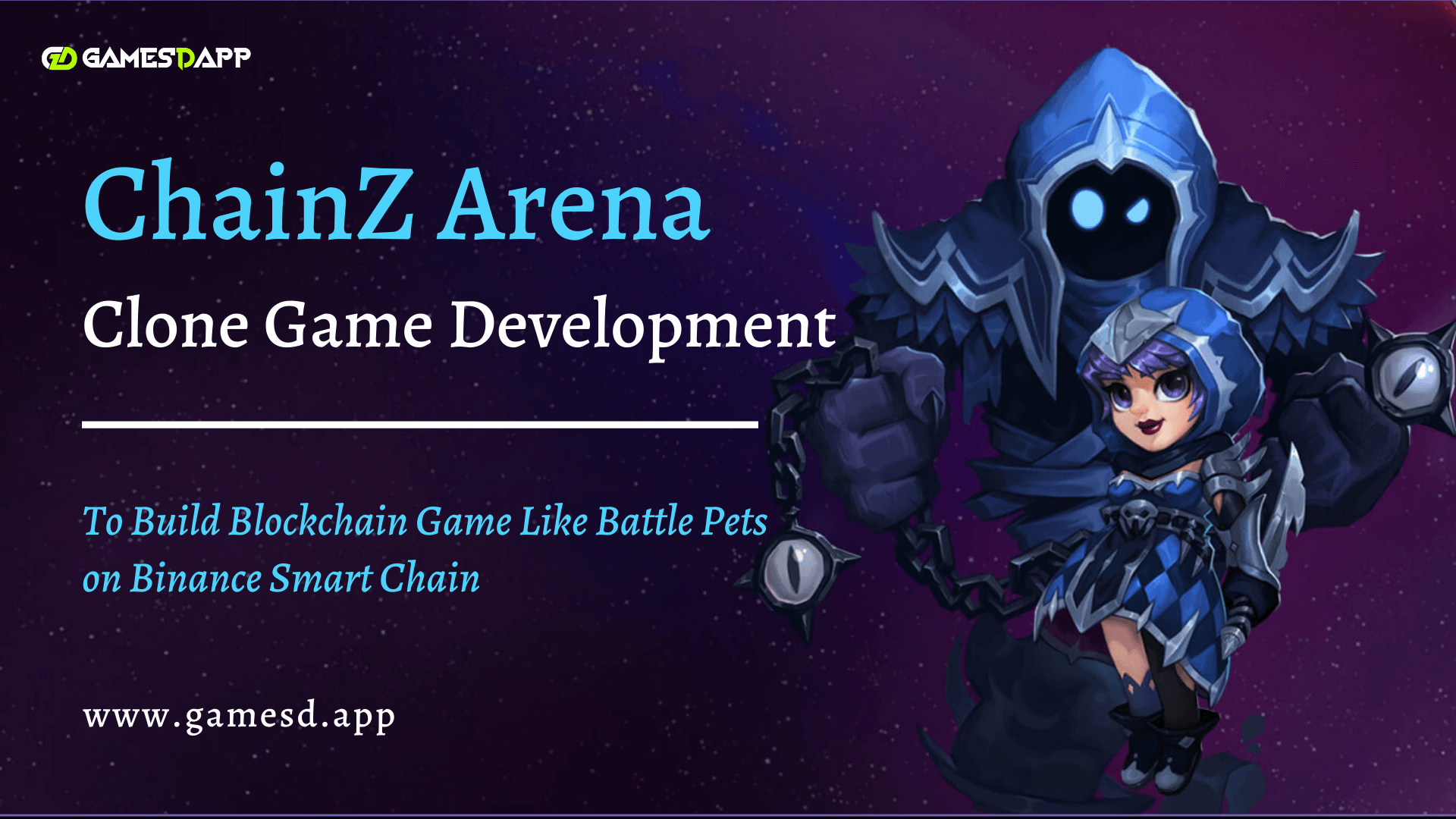 Now let us have a glance at ChainZ Arena Game on Binance Smart Chain,  its features and how to develop a dapp clone game like ChainZ Arena.

ChainZ Arena is the first-ever cross-blockchain/platform idle mining RPG game, that uses any of the 3 blockchains (TRON, ETH, EOS) giving players a unique game experience. Combining Ethereum,EOS and the TRON blockchain that allows users to join together in one virtual world where only one can rule.

When Demons attack the land of ChainZ the defeat to battle starts, by combining the powers of Earth, wood, water and fire to save this kingdom as yours. You can assemble your heroes, build your army and battle the demons to became a boss in the legengdary Arena.You can equip your team by collecting the almighty hammer or gold to gather your resources.

In ChainZ Arena you can mine a unique token called SOUL Token. This token exists on 3 blockchains EOS, TRON nd Ethereum thereby interconnecting three smart contracts, providing unique blockchain gameplay.The maximum supply of SOUL Tokens is about 999,999,999 and a unique mechanism by which the players can also mine while offline.

- 100% of SOUL Tokens can be mined by players alone! The team will not own ANY SOUL Tokens and there is no price manipulation.

- 100% of SOULdrops will go to SOUL Token Holders!

- Each SOUL drop is need to be collected manually and the cycle is 24 hours.

The most important need for a game in addition to the fun factor and uniqueness is that it needs a huge user base to sustain the game itself. Integration of cross chain technology allows plenty of users. This is also a reason for other games to fail as the user base drops off. Another reason for implementing cross chain into ChainZ Arena is to build something that has not been done as yet, a token that simultaneously lives on 3 blockchains and it’s all for an idle mining RPG game!

Global service, rewarded by ranking every 7 days, massive materials, SOUL waiting for you

How to play game on ChainZ Arena?

Hence ChainZ Arena is a web-based game, it runs well on both mobile and desktop, so go to the Explorer and simply open ChainZ Arena.

The first step is to choose the faction you want to belong to — EOS, ETH or TRX. Other than that, if you want to buy anything in the game, you must have deposit ETH, EOS or TRX into your ChainZ wallet. You can also be able to withdraw it back at anytime to your own wallet, but only to a wallet of the faction that you’ve chosen before.

The Heroes are the main characters of the game; you have to level them up and make them to participate in three different types of activities - Battle, Challenge and Arena.

Now let’s start with Battles.
If you’ve ever played games like AFK Arena, you’ll definitely notice the parallels where your heroes are constantly “fighting” the opposing forces and finding loot. This battle basically defines why the game is an idle game. You can able to claim these loot boxes at anytime, but if you wait for a long period, the box will be full and the rewards that you’ll find in there won’t increase or improve anymore. This boxes consists of all kinds of different things like equipments, scrolls for summoning, SOUL tokens etc, but for sure they will give you a bunch of Dragon and Gold coins.

It is a kind of the story mode of ChainZ Arena. You can select your formation of up to 6 heroes who can fight against a intended formation of opponents. Once you’ve completed a challenge, you will receive a reward and qualify for the next challenge, which is typically more difficult. Every 5th challenge is typically a tough fight, which makes these challenges a lot more crucial. Once after a challenge has started,it will be completely automatic.

You can purchase mining hammers to make your game much more efficient. Those hammers will only available for cryptocurrency payments that boosts your production.

The effect of a hammer only lasts atleast few hours (between 1 and 12 hours) and you can queue another hammer so that you don’t need to check back too often. This is also why the higher-grade hammers are more expensive per hour than the cheaper ones; you simply can relax for longer.

If you’ve applied a hammer, you also get a chance of finding more advanced loot boxes. They don’t come very often, but are totally worth it.

The Arena is the PvP game mode within ChainZ. Just like in the challenges, you have to set up a formation of up to 6 heroes to fight against other players. Your ideal formation may differ from the one for certain challenges, but overall it’s likely you won’t be pumping up many more heroes than your core 6. You can match against other players as many times per day as you want. However, other players can match against you, as well. If you attack and win, you gain points and your opponents loses points based on an ELO-like point system.

Gamesdapp assists you to build your own Blockchain Game Like ChainZ Arena on Binance Smart Chain inbuilt with the exciting and security features at the most affordable price, that will attract gamers all around the world. Our ChainZ Arena  Clone Games comes with,

Get in touch with us, and we’ll discuss more!