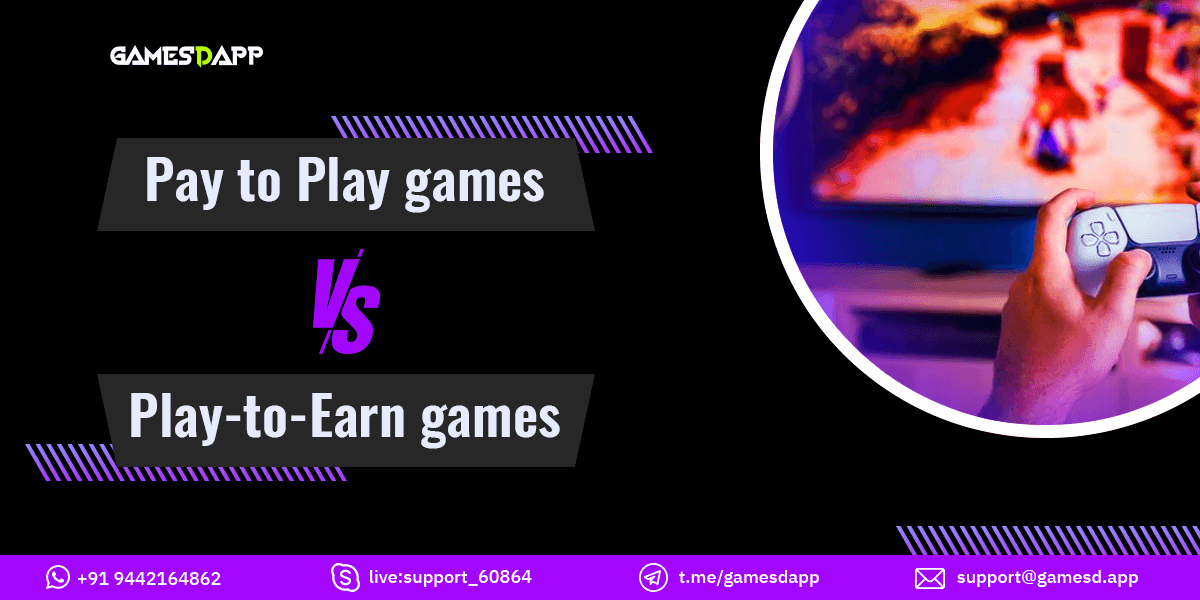 Blockchain is used in games that are based on cryptocurrency technology. Before comprehending crypto gaming, it is necessary to comprehend the theoretical foundation of such games. a blockchain is fundamentally a database or ledger that shares data among a network of computers to preserve information.

The network is extremely secure because it cannot be changed or erased once data is entered into the blockchain. To further ensure that there is no central control of information, the database is accessible to all linked computers.

Now coming to the point, the first thing that usually springs to mind when you think of video games is how enjoyable they are. There are two primary game categories to pick from when looking for a new game P2P and P2E games.

Making the best decision might be challenging because both offer distinct advantages and disadvantages. In this blog, we will go through the key distinctions between P2P and P2E games so you can choose the one that is right for you.

What is Pay to Play Games?

P2P games are known to be Pay-to-Play games. These are video games that demand the player to buy an online service membership with a gaming console, game discs, and game cartridges. Additionally, the user might be compelled to buy extras like virtual products and in-game money.

These games are more appealing to players who prefer playing high-quality games because they frequently offer better visuals and audio than free-play games. some Pay-to-Play games also contain unique content that can only be accessed with a paid membership or by buying the game.

What is Play to Earn games?

Play-to-Earn games (P2E) are recognized as having a special economic model that mixes rewards with fun. By utilizing blockchain technology, these games allow players to gain access to digital assets like bitcoin tokens or NFTs just by participating in the game.

The rewards are typically obtained through engaging in a range of activities, such as competing with other players, finishing objectives and tasks in the game environment, or trading digital goods and commodities with other players.

Collisions In The Gaming industry

The advent of games that are pay-to-play and pay-to-earn has had a significant impact on the gaming industry. By earning incentives that can be converted into real money or cryptocurrency tokens, it has made it possible for gamers to monetize their games. Because, video games provide players with both amusement and a chance to generate money, this trend is encouraging more people to become interested in playing them.

Additionally, the development of P2P and P2E games has increased accessibility to gaming. for instance, many P2E games offer free play or only a little initial investment. They appeal to people who would not have the resources or access to buy traditional consoles and games.

They can provide players with digital goods or in-game incentives that can be exchanged besides selling the game itself. This enables game creators to increase game revenue and maintain player interest by releasing new content and updates often.

There are some significant distinctions to take into account between Pay-to-Play and Play to Earn games.

Pay-to-Play games typically demand players to buy extra items or materials to advance through the game and complete specific goals. Whereas, Play-to-Earn games give players real benefits for participating in the game, including cryptocurrency tokens or digital assets that can be traded outside the game.

Pay-to-Play games demand that the player buy a physical copy or a digital copy of the game to access it. while Play-to-Earn games can be accessed for nothing or a small fee. P2E games also provide the option to keep their rewards which might be worth real money.

Pay-to-Play games need players to make significant financial investments before they can enjoy the gameplay. Nevertheless, in Play-to-Earn games, players can spend their in-game resources buying things or materials that will advance them in the environment.

Pay-to-Play games offer better audio and visuals. The potential for players to measure their performance and get real rewards from their gaming experience is something that P2E games offer, which is even better.

Compared to P2E games, P2P games typically offer more intense and immersive experiences. For example, Games like GTA, and V provide a compelling, story-driven experience. Whereas P2E games like those in the metaverse provide a more laid-back setting for players to engage and have fun.

P2P game developers prioritize building intricate game worlds for players to explore, hence these games tend to be more sophisticated. Whereas, P2E games have chosen a different strategy since they use blockchain technology to let players own their virtual goods and rewards.

Pay-to-Play game development typically costs more than Play-to-Earn game development since elaborate game worlds and storylines must be invested in. The developer must invest less in P2E games since they concentrate on giving players incentives with real-world value.

However, that doesn't necessarily indicate they are prepared to grow. P2E games demand significant development talents to create a hit title.

The Pay-to-Play model is the de facto business model in many industries such as online gaming. Users must pay to gain access to exclusive features and benefits who use this business model.

Since the majority of gambling games can only be accessed after registration and a real-money payment, paying to access games is a simple idea for the extraordinary online casino player to grasp.

However, the paradigm refers to traditional MMORPGs like Eve online and the world of Warcraft when discussing non-gambling video games.

The Play-to-Earn approach which is based on the open economy paradigm pays participants for their contributions to the game. The contribution could take the form of regular gameplay, special occasions, or completing in-game missions. Players of the game can make money by doing so. We probably need to go for three key elements to operate such as,

NFT-the exclusive tokens are available for exchange and sale.

Cryptocurrencies on the blockchain are used as funds.

Thus, the distinctions between P2P and P2E gaming ultimately rest with the game development company, although each has certain advantages for different types of players. It is essential to consider the reward system that functions best for your game when creating or choosing a suitable platform for your users.

GamesdApp is a top blockchain game development company focused on developing P2P and P2E games. They work hard to provide players with a safe and enjoyable gaming experience. We have wealth of expertise in creating safe and high-quality online p2e games and p2p games. They use cutting-edge blockchain technology to make sure that players' transactions are safe and secure.