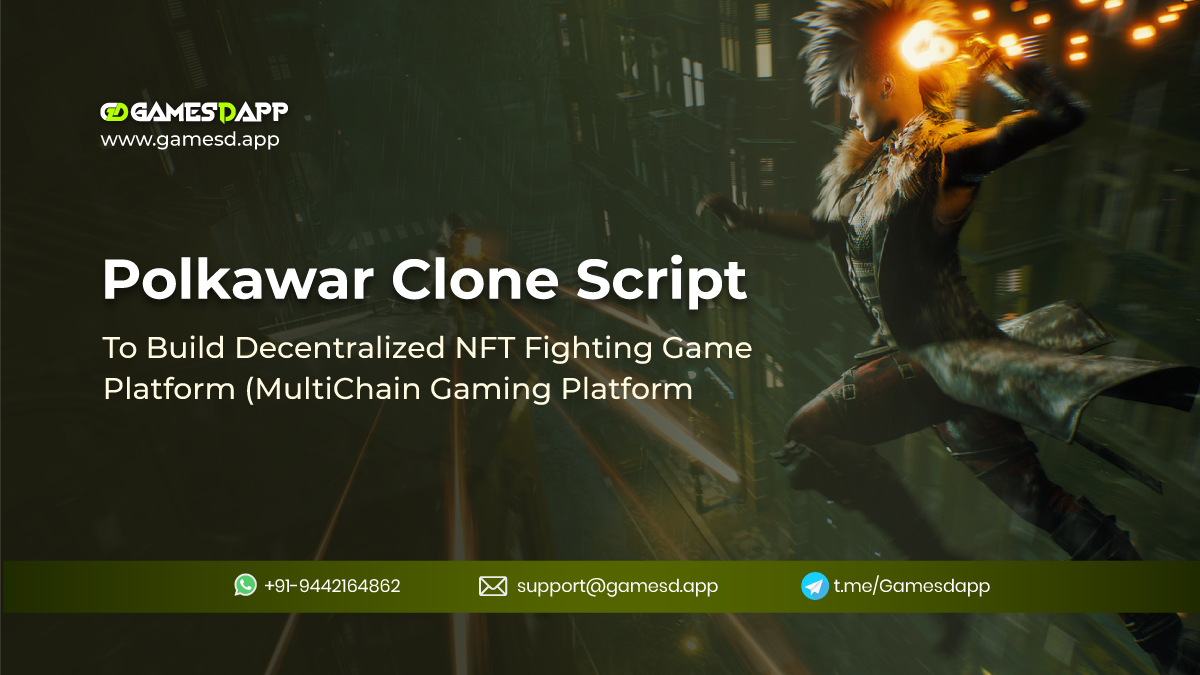 Polkawar Clone Script is a website script of a traditional battle and betting NFT game built over the Blockchain network. The game characters, battle equipment, and battle weapons everything here is minted in the form of NFTs. These NFTs gain value in two ways. - Trading with another user - Increase the mana of the NFTs by using them on the battlefield.

<< Get a Free Live Demo of Polkawar Clone Script >>

Each of the 3 Characters will have different attributes implemented in the smart contract and based on the gameplay the attributes fluctuate in real-time.

The players can purchase the game characters and necessary weapons to enter the battlefield. The marketplace will have a collection of NFTs that can be tradeable between users and with the admin.

These NFTs can later be traded outside the platform like Opensea as the metadata of NFTs allows trade anywhere in the same chain.

In addition, if the player wishes to get the physical form of the equipment and weapons, it can be purchased and get shipped in real-time.

The polkawar game logic initiates a battle between two players of nearly closest properties. The choice of competitor is selected based on a First come first serve basis. If no competitor is available, the properties and bet value of USDC will be locked in the system and notify the player when the competitor is on the field In the battle between a and b, the winner will be decided by comparing their properties using a game logic formula implemented in smart contract When the battle ends, the winner will get all USDC collected from both parties and locked in escrow.

Maximum equipment a character can wear at the same time:

PWAR is the native token used in PolkaWar blockchain-based NFT game realm. The tokens are
used for the following features:

3. Marketplace fee: They are used to pay for goods and services in the NFT marketplace. For instance: if you want to sell your NFT on PolkaWar marketplace, you must pay a small amount of PWAR tokens as a fee and they will be burnt for ecosystem development.

4. Renting fee: An NFT renting platform is expected to be built for PolkaWar Realm users. This
will allow users the ability to lease their own characters to others for battle and receive the fees in exchange, if they aren't playing the game actively themselves.

5. Governance: Token holders can participate in the decentralized governance process that
decides on the use of revenues, game development, and growth.

Unlike other clone scripts, we are delivering a DApp gaming solution developed from scratch.

To avoid security lack/loopholes and uncertain bugs, the smart contract involved in the entire gaming solution will be developed from scratch

The contract will be sent for truffle test via an automated testing framework to confirm the logic implemented as drafted. The client will have the report and solidity files applicable to process audit works.

What do we provide in our clone solution of Polkawar?

- Admin panel to manage entry fee, users, and everything involved in the system

- The game logic can be customized based on client preference

- Technical Support After the game launch

We are here, glad to make you a precious opportunity of customizing the features and functionalities of the platform according to your business needs. Our technical experts will make you clear all your queries at any time.

Enquire now to shape your own NFT Gaming Platform with us!!

Game Development
Blockchain Ludo Game Development Company
Ludo game permits multiple players to relish the game without intervention. Ludo has acquired immense favor with all generations, though there have been small modifications among the game....
Explore

Game Development
SecondLive Clone Script - To Launch a 3D Virtual Platform like SecondLive on BSC
SecondLive is a "Diverse 3D Virtual Space" where you can transform into your perfect virtual avatar and participate in a variety of real-life activities...
Explore