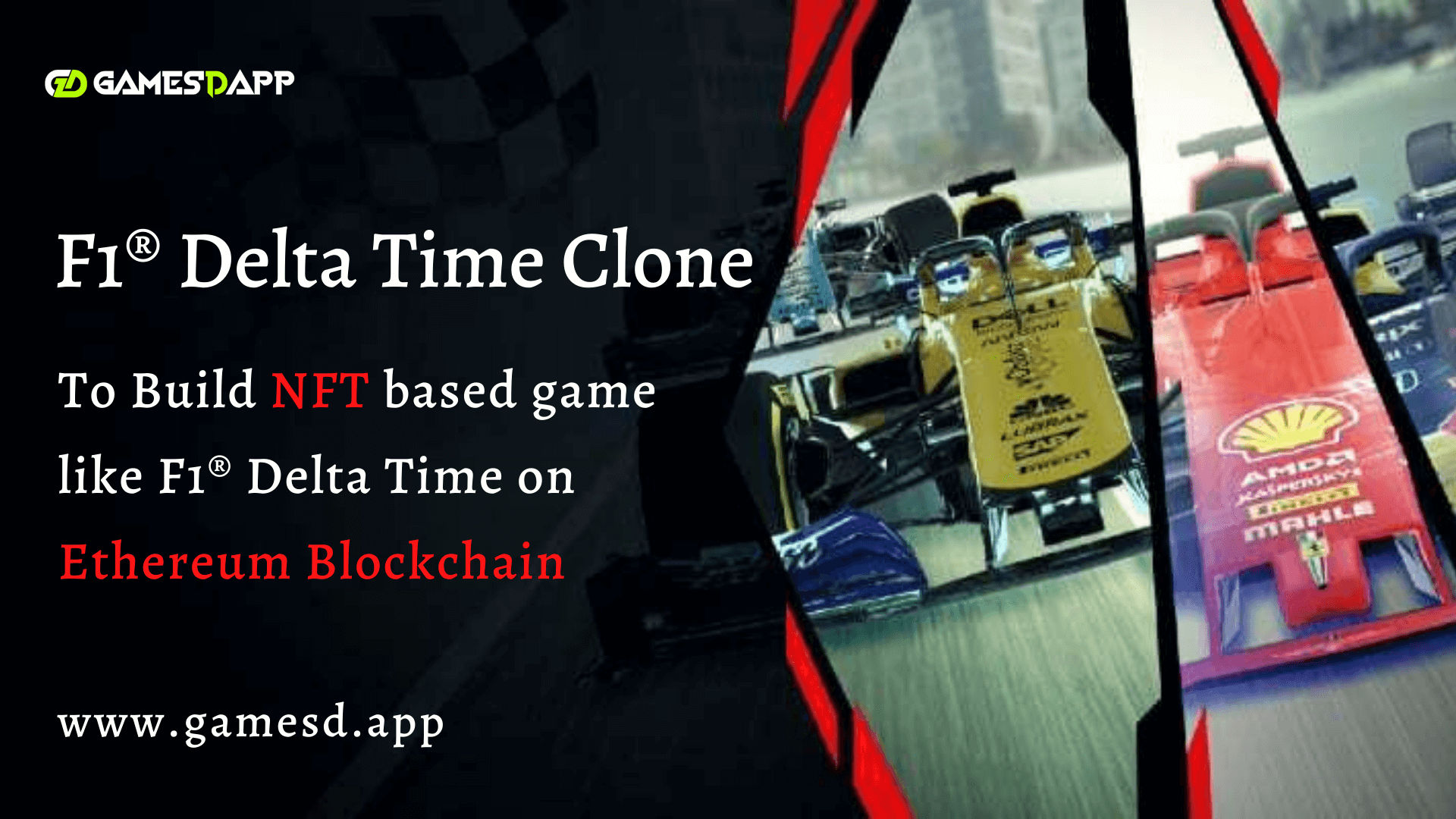 Blockchain technology is adopting a huge part of the gaming industry and more and more games are created with the help of this technology. Bitcoin and other cryptocurrencies are backed by blockchain and are very actively used by online gaming around the world.

A popular use case of blockchain technology in gaming is that it has been the application of in-game Non-Fungible Tokens , that is the cryptographic tokens which verifiably prove the ownership, credibility and security of an asset.

Hence many blockchain based NFT games are ruling the market. F1 Delta Time is a NFT based blockchain game on ETH that is changing the world of gaming.

What is F1 Delta Time?

F1® Delta Time is a blockchain-based game on Ethereum which utilizes non fungible tokens and the REVV-ERC20 tokens respectively. It is an action racing game that essentially revolves around collecting and exchanging unique Formula one(F1) Cars, Drivers, and Components

F1 Delta Time will include a collectible element using non-fungible tokens (NFTs) and a racing element based on the trading and acquisition of these NFTs. All cars, drivers and components in the game are NFTs, each of are verifiably unique, completely owned by a player who has the permission to use, trade or sell it.

REVV is used as the currency in the game, and can be used in transactions such as paying entry fees and purchasing certain items.

F1 Delta Time Game Clone is a website clone script that is built with the same concept as the popular F1 Delta Time by integrating unique and engaging features.  This makes the game more exciting and hence gains audience recognition.

At Gamesdapp, Our blockchain game developers work to provide the finest NFT game clones like F1 Delta Time Game Clone. This clone solution is built up with the latest technologies to enable quick turnover features. This F1® Delta Time Game Clone is readily available for launch on both android and iOS platforms.

F1 Delta Time consists of two main components: the Collectibles Game and the Racing Game. Both components are described below

It adds gamification to the collection of non-fungible tokens (referred to as “Collectibles” in F1® Delta Time), adding layers such as achievements and leaderboards. The design of the collectibles component of the game simulates traditional scarcity-based collecting games or activities, like football stickers, baseball cards, or model collection.

The Racing Game will be a gaming experience similar to traditional racing games. The player will be able to take their Collectibles like Cars, Drivers, Components, Trinkets and manage them into a race-ready Grand Prix entrant. Gameplay is presented through a 2.5D perspective overlooking the selected track, with the player in command of their racing car’s acceleration and braking.

In F1 Delta Time, a Collectible - a non-fungible token is a piece of digital content that is unique. As an NFT, a Collectible can be fully owned by a player, with that player having the ultimate permission to use, sell, or trade the Collectibles.

Most critical game content in F1 Delta Time is comprised of NFTs: Cars, Drivers, Components, Tracks, and Trinkets, with Components referring to sets of different parts or equipment-type Collectibles that can be attached to a Car or Driver to improve their base performance.

Thus All NFTs in F1 Delta Time will be compliant with the ERC-721 standard.

REV - like the Collectibles - can be fully owned by a player, but rather than acting as a piece of content within the game, REV acts as the games primary currency.

This currency is used in a number of ways,

- To purchase certain types of Collectibles, as a player reward for completing certain actions or achievements

- As a fee to compete in the Racing Game, and to use as rewards for races.

Both the fungible and non-fungible tokens have a finite supply.

Traditionally, staking refers to the holding a token for a fixed period, and earning rewards on it. The rewards may vary depending on the length of time and the value that was staked.

In F1® Delta Time, staking is a new feature designed to allow the owners of Car NFTs to calmly generate REV tokens.

What Is the REV Token?

REV Tokens, or REVs, are an ERC-20 token. REVs are the primary currency used in F1® Delta Time gaming.

REVs have a number of utilities in F1® Delta Time, including serving as the in-game currency used for payment and rewards during races, and to acquire certain items. Like any other in-game currency, the more REVs you own, the more options you will have in the game — whether it is participating in races, buying cars, or upgrading your racing assets.

So in simple, Staking is a mechanism that allows you to passively generate REVs.

How Does Staking Work?

In F1® Delta Time, Car Collectibles are NFTs and have the ability to generate REVs through the Staking mechanism. When you choose to Stake your NFT, you temporarily transfer ownership to F1® Delta Time and therefore lose the ability to use, race or trade the NFT, but you will earn REVs based on the period of time that your NFT is Staked.

Initially, Staking will be the only way to earn REVs.

Staking rewards are calculated daily. When the owner of an NFT Stakes that NFT, they are entitled to a certain amount of REV based on the NFT’s Rarity. The higher the rarity, the more REVs they receive.

Rewards for Staking will be distributed at the end of each week.

Players can choose to withdraw a Staked NFT at any time. When an owner withdraws their NFT, the ownership is automatically transferred from F1® Delta Time back to the owner.

Hence Staking is a new way to leverage blockchain for games, and allows us to deliver greater value to owners of F1® Delta Time collectibles.

How to build NFT based blockchain game like F1® Delta Time?

As you’ve realized the gaming functions and features of F1® Delta Time, would you wish to develop the same gaming platform exactly like this? We are right here to guide you!!

Our well versed blochchain game developers build unique high end gaming platform for the users with the focus to deliver a gaming platform with spectacular graphics, HD display, high end processor and other essential attributes. Our main aim is to bring our customers ideas into reality and offer them the gaming platform according to the competitive market which can meet all the demands of user, clients and players in terms of modernity and advance features.

Create your own Blockchain game like F1® Delta Time!

Disclaimer: Gamesdapp doesn't have any control over the trademark of "F1 Delta Time" and we are not doing any promotions for them. We are just using the term for quick understanding purposes only. Our services are not meant to influence any organization or individual.