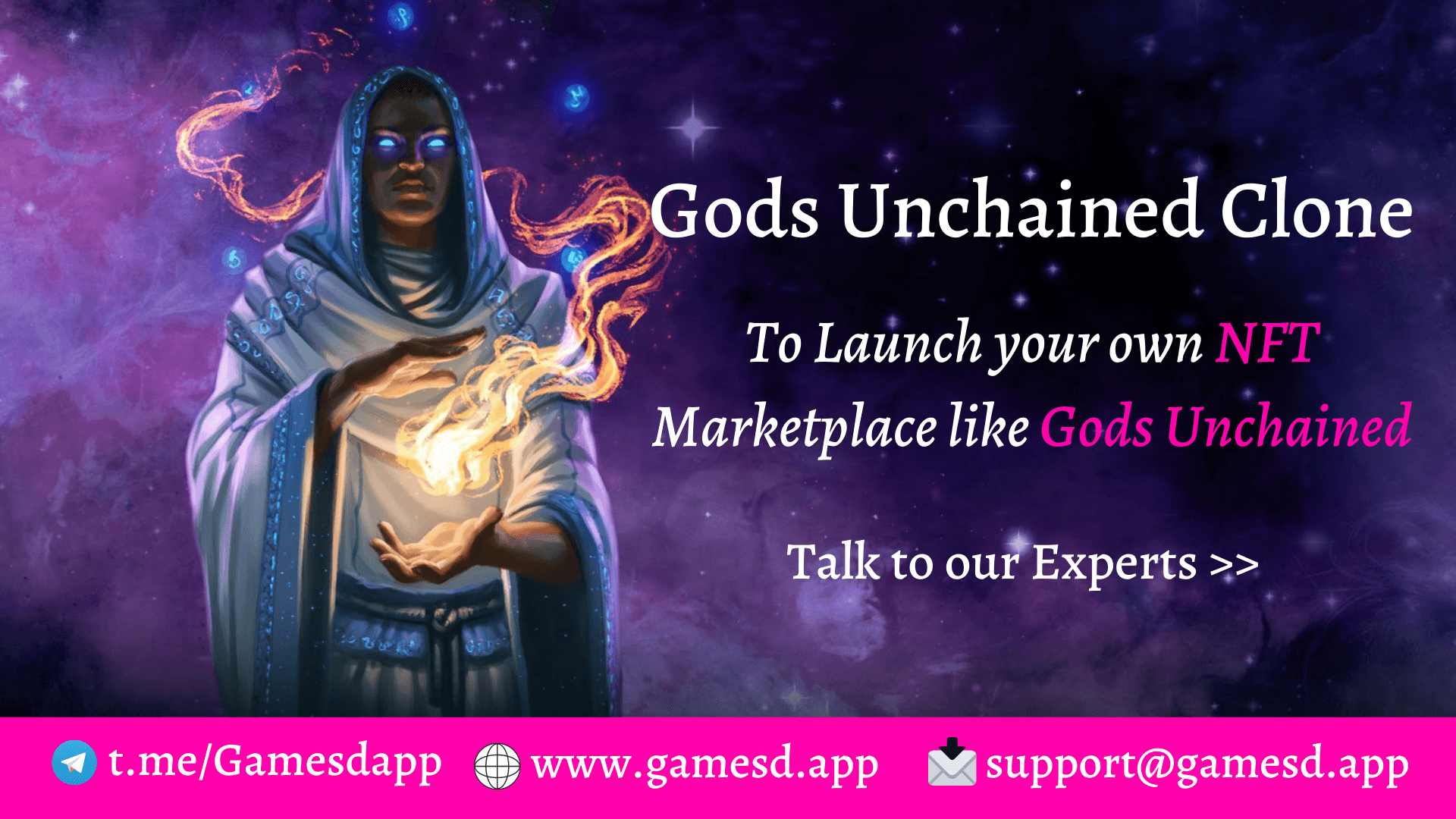 The world covered with technology bedsheet, Now it little moves to the gaming field. Children, adults moreover three fourth of the world dipped into gaming. They are shown their interest to play and even they are ready to build their own games. In addition, the gaming industry sees the revolution of blockchain because the gamers are interested to play decentralized games.

Blockchain games are played with coins and tokens. You have an opportunity to earn crypto coins and also you can sell them too. This is a great feast for crypto lovers. Gods unchained is one the treading game in the blockchain field. Here you can get the ideas about what is goads unchained, how to play this game and how to build a game like gods unchained.

Gods unchained is the online card collectable blockchain game. Gods Unchained Clone is a website clone of a trading card game– but built for non-fungible tokens (NFTs) that runs on the Ethereum blockchain. Gamesdapp as an Extrusive Blockchain Game Development Company, helps you to launch NFT based Trading Card Game like Gods Unchained on Ethereum Blockchain.

This Gods Unchained Game Clone offers unique assets that are entirely owned and as well as managed by you. Every single card or added to a specific playing deck which you prefer or you own can be traded on a public marketplace.The game consists of a PVP system with your unique assets as the playing pieces.

Our Gods Unchained Clone game is useful for those who have the interest to play a classic collectable card game. The main features of the game that have all cards which have unique ERC-721 standard. Players use ethereum wallet to sell and buy cards. Developers are arrange Gods Unchained as a game format free-to-play. This is elucidated by the fact that in order to dive into this world, you do not need to buy cards. Every week the rotation of free decks is updated, that can be played with opponents, it gives a free opportunity and usefulness for your strategies and appreciates their strength.

Here the Gamers have a deck made up of 30 cards. Before going to use you have to know about the types of cards and understand the abilities of the cards. Card types are comparable to the previous counterpart and can be spells, weapons, creatures and special god cards. Each player has divine power, that can be used once per game. The game goes on till the opponents run out of the hit points. In general, the conditions are simple and must be intuitive, even for a beginner in a related genre of games. One of the key features of the game is gods were mentioned earlier. The gods in this text illustrate the game factions. Each faction has its own semantic orientation and owns colour cards. If you use red cards in your deck then your desk will stronger and no need to make a mono deck to frame your deck to be perfect.

These booster helps to play the game with more possibilities. Developers create a flexible purchase system for any wallet. there are four types of booster types such as

Rare: It consists of 5 cards inside and which is guaranteed to be better or better. The amount of one pack is 0.012 ETH

Epic: It consists of 5 cards and which is guaranteed to be epic or better. The amount of one pack is 0.075 ETH

Legendary: It consists of 5 cards inside and which is guaranteed to be legendary. The amount of one pack is 0.0112 ETH

Shiny legendary: Which have the one guaranteed legendary or better card in the better one. The amount of one pack is 1 ETH.The developers have expected an interesting moment of cards from the ordinary in the Shine. In addition, the fact is when opening multiple boosters, you will necessarily become the happy owner of identical cards.

Therefore, there is the opportunity to merge five identical cards as a one shadow card, and five shadow cards as a shiny. This is the Very good solution for this kind of problem. Now the cards you do not assemble dust in store, that, if desired, you will sell them three times expensive.

Creating games is not a big thing but the wrong coding in smart contract mess everything. For that sake you need to choose the right dapp developers.

How to build a NFT Marketplace like Gods Unchained?

We create Gods Unchained like marketplace where users can buy and sell digital collectables and trading cards, and compete with other players on the network and can use their gods to eliminate opponents. Our Gods unchained like NFT Marketplace will not charge any commision.

The platform is free for every new player to receive a free collection of 70 cards. This is actually quite unusual and very a consumer friendly marketplace. However this NFT marketplace like Gods Unchained will attratcts a gas fee for every buy or sell transaction. This gas feee is quite unvoidable for any marketplace based on Ethereum transactions.

Different NFT Marketplaces present their NFTs in different ways, the latest bid and the remaining time of an auction etc. Players can also able to earn cards or receive rewards from several tournaments or else an alternative method to get new cards is by trading with other players in the marketplace.

Hence the users can do transactions using ethereum  and the metamask wallet is recommended for the that.

This is quite hard but with the help of experts, you made it easier. Many entrepreneurs are ready to invest in blockchain games. Decentralized games like Gods Unchained has created a big revolution in the gaming industry. Even though, Our Gods Unchained Clone can also be  built with the latest blockchain networks. This is one of the topmost business to earn crypto coins and tokens. In addition, smart contract plays a prominent role in such decentralized trading games. Transperancy is the major highlight as it stores all the transactions and trades, thus will make trust among the gamers to spend. Fix your own rules for your games. This decentralized trading card game platform is highly beneficial for Gamers, game developers, blockchain developers and content creators.

Why Choose Us to Develop NFT Marketplace like Gods Unchained?

If you think its the right time to build your own NFT marketplace like Gods Unchained. Then you have to choose the best NFT Game Developers who have incredible technical skills and creative thinking.

We are the leading experts in NFT Game Development services assists you in the creation of your own desired Online game based on NFT Marketplace. We offer a bug free NFT marketplace similar to Gods Unchained on Ethereum network, implemented with exclusive features thereby satisfying your requirements. Our NFT Game Development services will create a massive profit in gaming business. Our developers render your outcome as much as perfect.