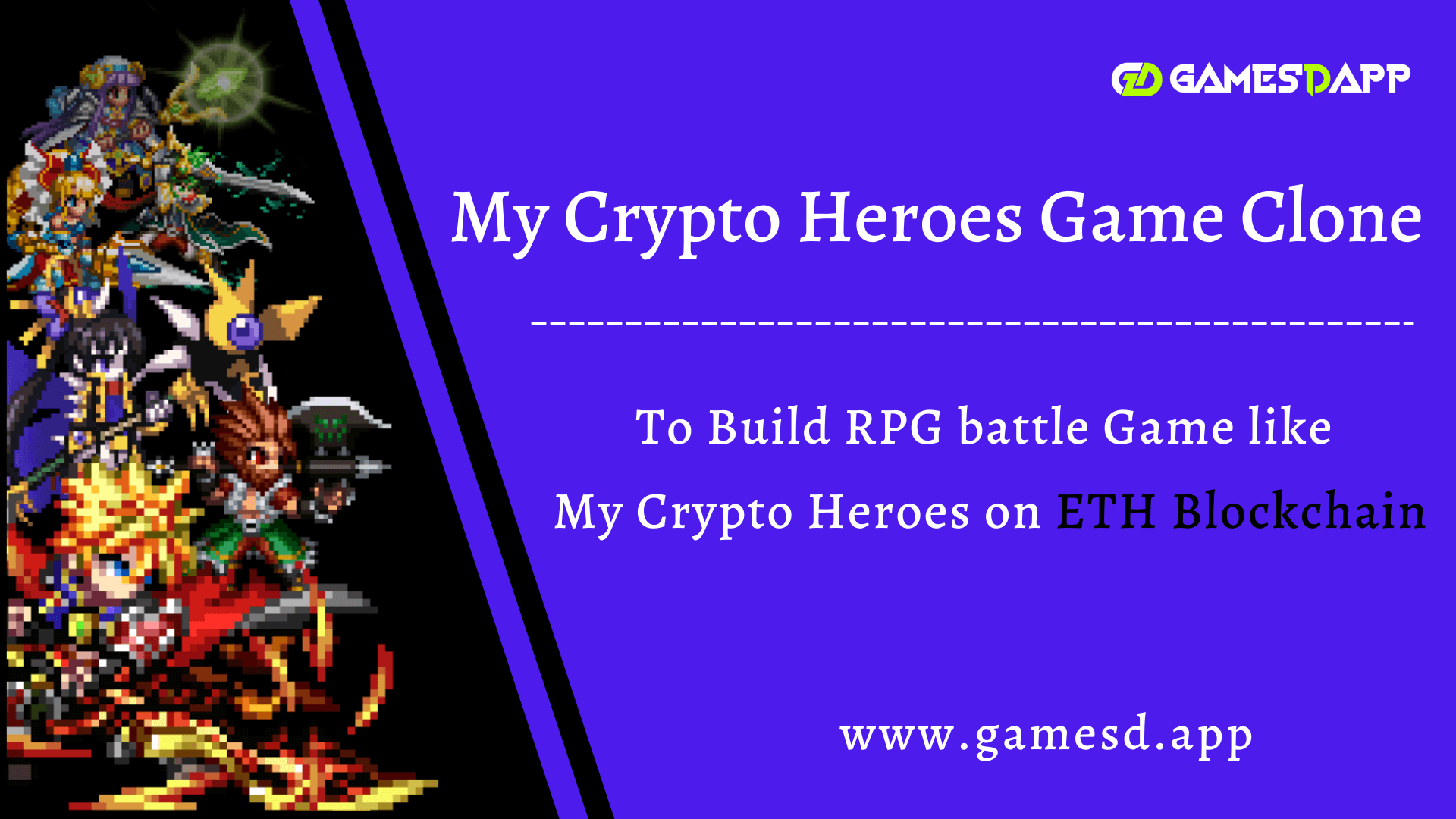 We Gamesdapp, as expertize in Blockchain Game Development offers clone game of popular blockchain games in the market. We provide My Crypto Heroes Game Clone with existing role-playing game featuring historic heroes and battles where the players can collect new heroes and items through the in-game currency,GUM. These assets are stored on-chain that allows players to buy and sell items for Ether, at anytime and anywhere.

It is an auto-battler game that features Heroes and Extensions secured by the Ethereum Blockchain as ERC 721 token, while you see their value grow as your progress through the game.

The main gameplay of MCH involves PvE (Dungeon Explorer) and PvP battles with their trained Heroes.

Send your heroes into dungeons to collect EXP and find rare items, called Original Extensions (ERC-721 token). EXP can be used to level up your assets.

Fight other players in competitive tournaments, tailored to different player strengths. Top players earn Original Extensions (ERC-721) and eternal fame.
MCH uses blockchain technology to store the Heroes and Original extensions of the game that allows players to freely trade digital assets of the game. To carry out trading you need a specific application called a “Wallet” to purchase and store game assets and cryptocurrency such as Ethereum (ETH).

Hence there are 2 types of extensions.

Assets in My Crypto Heroes

Assets such as Heroes, Extensions (= weapons), or even Land that can be bought and sold for in-game currency GUM or ETH (via OpenSea).

Heroes are the central part of the ecosystem. In total, there will ever be a maximum of 200 different Hero Types in the game. Each Hero has different rarity levels. There are 4 rarity levels with different supply: Legendary (20), Epic (100), Rare (250), Uncommon (1000).Users can either purchase heroes from other players for ETH (OpenSea) or GUM (in-game) .The more heroes = the more quests = the more chances to find Extensions = the more ETH / GUM you earn per month.

Extensions are weapons in MCH. Extensions drop in quests and can be won through weekly tournaments. The only way to buy Extensions is from other players, either for GUM (in-game currency) or ETH (via OpenSea).There are 5 rarity levels, each with a different drop probability: Legendary, Epic, Rare, Uncommon, and Common. As a rule of thumb: The higher the quest difficulty, the higher the chances to find a higher rarity Extension.

Land is also an ERC721 token and can be freely traded for ETH on OpenSea, so anyone who is interested to buy some Land today, needs to buy it from other players.

Farmers go on quests to level up heroes and find rare items. Sell your loot on the market to earn GUM, the currency of MCH.

Warriors fight in PvP battles for rare items and fame. Prove your skill in regular tournaments, Land vs. Land battles, and custom arenas.

Are you one of the creative kind? Sell your self-made hero skins on the art market for GUM. Or get creative in your own tournament modes.

Traders use the in-game market to earn GUM. They buy the supply of farmers and equip warriors before they send their heroes into battle.

Heroes can be purchased in the pre-sale with Ethereum (ETH), and GUM (Game User Money) after the game release.

There are also free heroes, so it is possible to play the game for free.

Form a team with the heroes you have acquired and go forth into the world of My Crypto Heroes!

You can name and customize your hero's appearance to your liking.

By using the art edit function, you can create your own truly original hero with extra additional abilities

Through clearing quests Heroes will level up, acquiring items and becoming stronger.

Extensions are equipment that powers up your hero.

By defeating enemies in quests, you can obtain these extensions such as swords and armor.

If you manage to get rare, special extensions, you’ll be the envy of everybody!

Buying and Selling Heroes and Extensions

Heroes and extensions can be bought and sold through the marketplace.

Through clever economic moves, you can greatly increase your power and asset value.

Land, through ownership, will generate profit just like actual real estate does.

Profits are generated when other players visit your land and spend GUM while on quests."

Land owned by other players can be acquired through battles. If you defeat another player in a battle, you can choose to purchase their land.

Collecting lots of lands and dominating Crypto World is the ultimate goal.

Playing the game does not cost Gas

As MCH uses the Loom Network side chain, Gas is not necessary to play the game. Heroes, extensions and other assets can be managed through the Ethereum wallet.

Well, If you are all set to launch your own gaming platform like My Crypto Heroes, Gamesdapp sets you free to develop your game your way!

Build RPG Game like My Crypto Heroes on Ethereum Blockchain

Gamesdapp helps you to Create truely blockchain based games and DApps that are highly complex, robust and scalable. You can Instantly build a Ethereum based Blockchain Game like My Crypto Heroes, with our readymade clone script!!

Disclaimer: Gamesdapp doesn't have any control over the trademark of "My Crypto Heroes" and we are not doing any promotions for them. We are just using the term for quick understanding purposes only. Our services are not meant to influence any organization or individual.