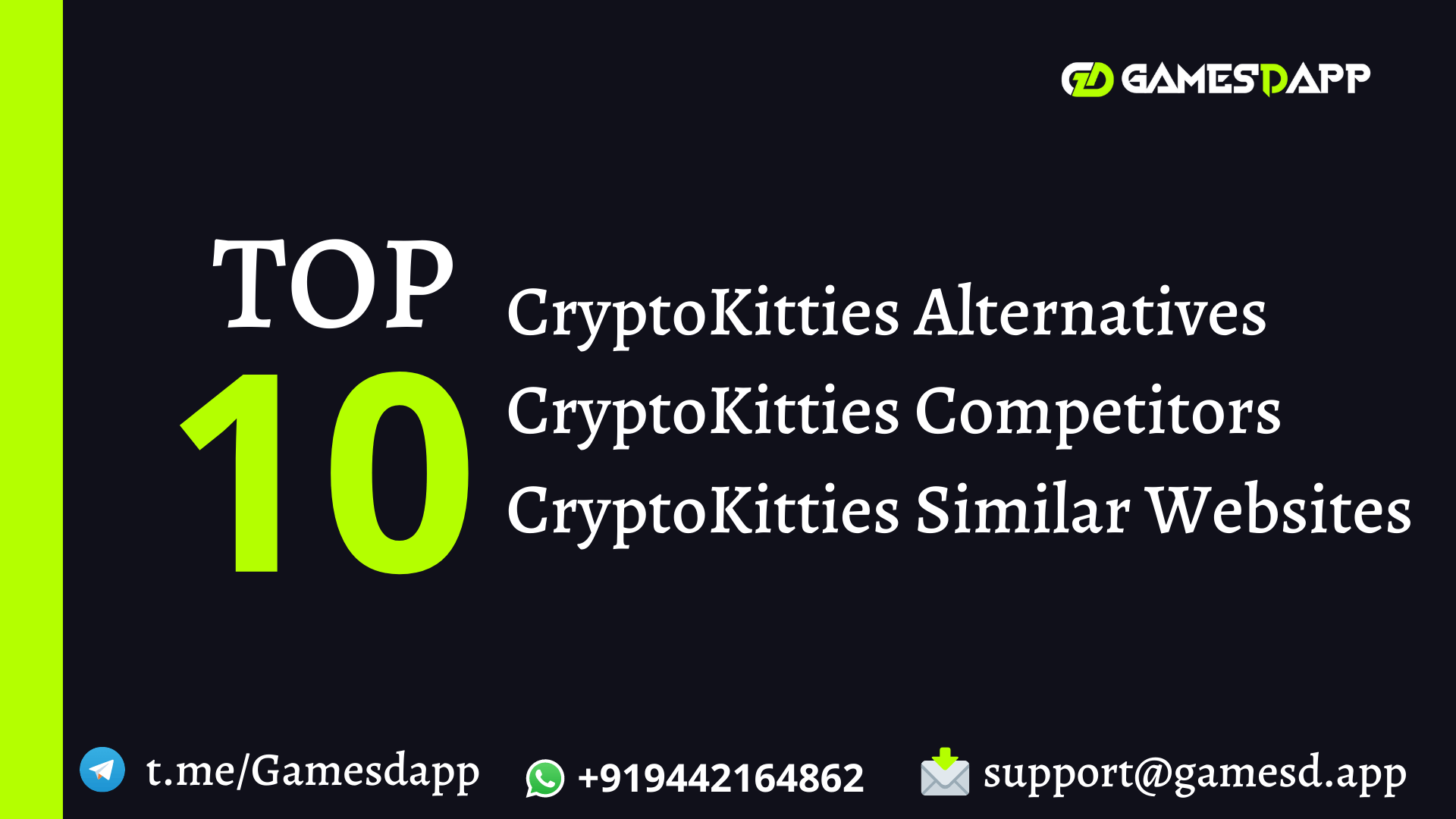 Crypto Collectibles are blooming and the success of Cryptokitties is one of the reason that has led to the surge of crypto collectibles. From puppies and pandas to little monsters and cryptobots, every game seems to be a fair one for crypto enthusiasts of such games.

CryptoKitties, the game that allows users to trade and breed virtual kittens between the users on Ethereum Blockchain.Technically Non Fungible Tokens are the virtual items that keeps changing in value over time.

Cryptokitties Game Clone is a NFT Game Platform like Cryptokitties that enable you to start your own Gaming Platform that allows you to digitally breed and trade cats, superimposed with excellent features wrapped around an appealing UI. Leverage a global user base in a short span with Cryptokitties Clone Script.

Crypto Doggies is the most acclaimed collectible game centered around the adorable creatures called crypto doggies. This Crypto Doggies game is built in BEP-20 BSC network where the Binance Smart Chain network provides the users with faster transactions and lower fees than ethereum network thus results in high reliability and stability.

The DOGGY token is the BSC utility token that has already been inducted in the Binance Smart Chain hall of fame. This DOGGY token has exceeded a total market capitalization of $350 million. Unlike other dog themed tokens which relies upon their mem oriented nature,Crypto Doggies has proven that there are many reasons for its high demand.

Hash Puppies is a NFT game built on NEO blockchain where you can collect, breed, train and interact with your adorable puppies. Each HashPuppy has a special genetic code - DNA that defines their appearance & personality which is a fully-animated high-resolution 3D character. If 2 puppies start mating they might foster secret attributes.

The HashPuppies will later move to the upcoming Neo N3 MainNet, where the built-in oracle capability means you can purchase a HashPuppy on the Ethereum blockchain and transfer it to the Neo N3 blockchain after the MainNet is released and the new HashPuppies smart contract is deployed.

Cryptobots is a Identical game of Cryptokitties based on Blockchain Technology. Like other cryptocurrency assets your bots are your own property that can actually fight and thus creates new bots. You can buy, sell or exchange those bots like other collector's items. The introduction of blockchain technologymakes the process more secure and reliable to trace ownership.

CryptoAlpaca is a decentralized pet-raising simulation game, where you can adopt your very own alpacas and breed brand-new offsprings. Each and every alpaca is unique and it wont be replicated or ravage. Besides you can get rewards by feeding them on a daily basis. Hence it is a well-designed blockchain game, with the goal of pushing the boundaries of crypto games.

CryptoFighters is a game built on Ethereum Blockchain, centered around cryptographically unique collectible fighters. The game allows to Collect, battle and level up your fighters to win new fighters! You can buy and sell your fighters on the marketplace and can place your bids to acquire the rarest fighters in the game and collect them all.

Fishbank is a Peer to Peer,PVP animal collection game of growing, trading and fighting unique digital fish with community driven economy and gaming assets based on smart contract on ETH Blockchain. As a cryptographically unique token every fish has its own image compiled by a special algorithm using all the parameters of certain fish. Increasing the fish weight by hunting other fish and taking a bite of them will lead to reach top of the global leaderboards.

Cryptohunt is a decentralized Augmented Reality adventure game similar to Pokemon Go similar to Pokemon Go in the sense that users have to complete certain location-based tasks and capture virtual objects. However, players can earn the native token as prize or reward. Here the token built on the Ethereum Blockchain, can be swapped for fiat currencies, or used for in-game purchases.

The tokens will only serve as a means of financial transactions inside the game and outside it, but the game will later have ERC721 tokens representing unique in-game items for visual customization of avatars or in game bonuses like grabbing items through walls etc.

Crypto Tulips are a parody of the claim that cryptocurrencies are exactly the same as the tulip mania bubble from 17th century Netherlands. The game lets users generate random flowers with mathematical formulae (algorithms). The algorithm generates a sequence of numbers which is then interpreted visually, giving every flower a unique look.

The tulips were launched on the Ethereum network as ERC721 tokens, but there is no marketplace. This doesn't mean users can't self-organize a trade, though.

The Ethereum Pyramid is a literal pyramid in the Ethereum blockchain. Users place stone blocks in a row. Each placement costs a certain amount of ether. Once there's no more room in the current row, the next one needs to be filled. Each brick in the next line must be placed over two previous ones, so a literal pyramid is formed – the new placer also pays the stones under it a fee, literally financing the exit of previous entrants.

Decentraland is a user-owned, Ethereum-based virtual world where you can play, explore, and interact with games and activities. You can also purchase parcels of land on which to build your own environments, marketplaces, and applications. Decentraland’s three native tokens — MANA, LAND, and Estate — all play a unique role in furnishing the Decentraland economy. The platform is governed by its users through the Decentraland DAO, a decentralized autonomous organization.

The above listed games are the top 10 Competitors and Alternatives of Cryptokitties in the current market trend. We Gamesdapp are the leading Blockchain Game Development Company offers Game Development solutions for all kinds of games. We provide clone script for all the above cryptokitties alternatives with all the essential gaming features, functions, add-ons, and plugins to instantly launch your own Gaming Platform through which game players can actively play the games and earn rewards.

The clone script can be developed in any of the blockchain network that suits your business essentials. We desire to bring our customers ideas into reality and offer them the best game application according to the competitive market which can meet all the demands of user, clients and players in terms of modernity and advance features.

Enquire us to Launch your own Blockchain Game Platform