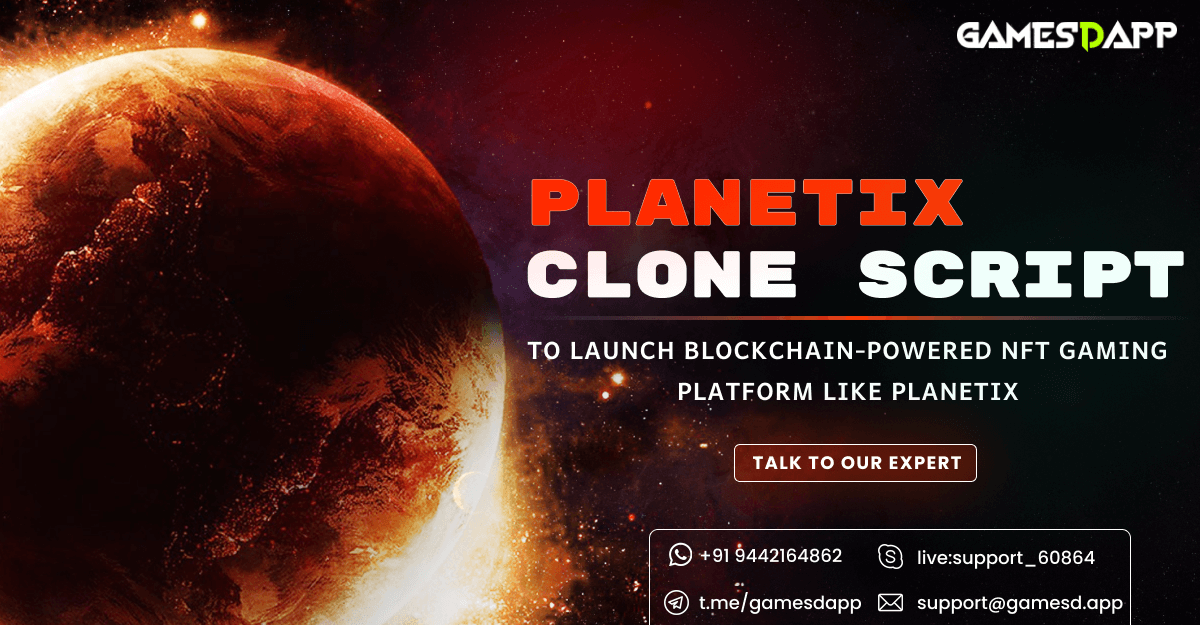 Planet IX is a multiplayer online strategy game where players can build and gather virtual land parcels known as PIX, which are in the form of NFTs made possible by the Polygon blockchain. The PlanetIX was first intended by its creator as an innovative type of simulated 3-D environment that would use an engaging gaming environment to emphasize the present issues facing our planet in the mid of the year 2020.

Planet IX Clone script is a ready-made NFT-based strategy game script, 100% error-free and tested where anyone can launch their blockchain gaming platform like PlanetIX. Where players create and gather virtual land parcels called PIX which are in the form of NFTs accelerated on the polygon blockchain.GamesdApp provides PlanetIX clone script that grips high-end security features and functionalities with an ERC-20 utility token, names IX token (IXT) which can be utilized in the platform to provide exclusive rights or opportunities for the players. You can customize our PlanetIX clone script as per your needs.

The game uses a metaverse concept to connect the real and virtual worlds, connecting users' actual location to the virtual worlds they create within it. Hexagonal tiles are produced by the land parcels and are dispersed throughout the grid.


The ability to build virtual land from all directions provides a more realistic perspective on how our real-world functions. Players in the game can purchase these digital plots of land which are identical to those on our planet, providing them with a brand new type of land gaming experience.


Through random pack drops, the PIXs can be purchased. Players can use a variety of tactics to stake out complete digital grid layers that are connected geographically. The more nearby PIXs a player discovers, the more likely it is that they will be allowed to mint new NFTs on the platform as a reward.

Supported Wallet In Our PlanetIX

The platform has larger and more difficulty to find outlier PIXs. Players are allowed to build their PIX collections over time, and rewards are given to those who have reached the highest development stage.

The exclusive features are listed below,

Planet IX reveals its mysteries in sections, and each section introduces a fresh set of NFTs for players to claim. The emphasis of the game will shift with each new chapter to emphasize the sustainability of the real globe and the effects of human activity on mother earth.

Every section will also have a mini-game to easter eggs tucked somewhere in the game's metaverse. Other surprises in the game include 721 territories with hidden artifacts and 1155 NFTs and landmarks.

These marketers stand for valuable, historical, and cultural parcels of property that will eventually belong to various interest groups. The players receive benefits from traders performing using the platform's native token when they own a famous NFT PIX. The historic NFTs improve the players' teamwork in the game.

DAO is another aspect of PlanetIX and players can vote on how the game should be administered there. It is the main entity that holds a size able investment in all many kinds of in-game NFTs available on the platform.

The Planet IX DAO has the aim to take control of sophisticated features for the game's upcoming NFT financing services which were created using smart contracts on the Ethereum blockchain. Holders of PlanetIX tokens will be able to vote and decide how the game is governed and run daily.

Consensus algorithms are used to award voting rights which will let stakeholders decide how to split up revenue from in-game transactions and what kind of events to hold for PlanetIX gamers.

Additionally, the DAO will include a treasury to manage how the platform's money is spent. The DAO's treasury will contribute to funding other like-minded NFT initiatives in the PlanetIX community and will support ongoing improvements to the game as well as producers, artists, and developers.

How to play the Planet IX clone script?

Connect - Install a Web3 wallet first, then connect to the PlanetIX clone. You must install the PlanetIX clone script to your wallet to trade and store IX tokens and NFT assets because it runs on the Polygon network.

Explore - Your initial objective is to strategically gather PIX while learning about the wonders of the PlanetIX clone in a virtual version of the planet that serves as your arena. Holding multiple PIX allows for the formation and growth of territorial NFTs. All of the territories can be traded with other players and range in size and rank.

Develop - Place a stake in your land, and resources will surface. Once gathered, you can trade it in for rewards that you'll need to develop your land with buildings and other amenities that enhance our P2E and PVP mechanics. True and exclusive ownership of your game assets is made possible by the NFT features of the game.


Utilize - The PlanetIX clone is a developing world rich in mythology and history. The goal is to reward players for their participation and have them control some aspects of the game. You can trade and stake your assets as the game advances for potential future and higher gains, resulting in a consistent stream of IXT prizes.

How to create an NFT marketplace like Planet IX?

If you want to create your own Blockchain-powered NFT gaming platform similar to PlanetIX.

GamesdApp is the right place to develop an NFT gaming platform.PlanetIX clone script that is specifically adapted to your company's needs is now available from Gamesdapp, a pioneer in creating NFT gaming ventures.

If you have a crew so strong, you are prepared to create your own NFT gaming platform like PlanetIX.

As a top NFT game development company, Gamesdapp provides you with the tools to create a specialized, high-end NFT marketplace. Players can browse every item offered in the game on our decentralized marketplace, which is similar to Planet IX.